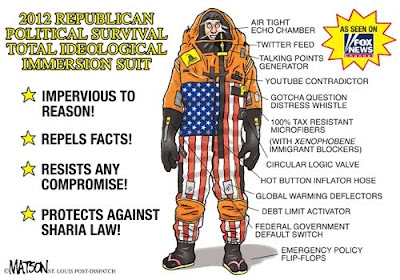 The Federal Reserve System was established to provide at least some control of monetary policy given the banking industries disastrous record on self-regulation and sound economic policies. Yet the current crop of would be GOP presidential candidates appear to want the nation's monetary policies to go back to those of the Old West where banks routinely failed and financial panics of varying magnitudes were both common place and cyclical. In my view, it's part and parcel with today's GOP mindset of rushing to the lowest - and most ignorant - common denominator in the Tea Party/Christianist cesspool that now comprises the party's base. A column in today's Washington Post looks at this wrong headed economic policy. Here are some highlights:

When John McCain was running for the Republican presidential nomination nearly 12 years ago, he declared that Alan Greenspan was so critical to the economy that, if the then-Federal Reserve chairman died, he’d put sunglasses on the body, prop him up and hope no one noticed.

It’s safe to say that GOP opinions of the Fed have slipped a bit since. Texas Gov. Rick Perry, a newly declared candidate for president, said it would be “treasonous” for Greenspan’s successor, Ben Bernanke, to “print more money between now and the election” in an effort to boost the economy.

They want balanced budgets, the sooner the better. Bachmann, for instance, has advocated an immediate 40 percent cut to federal spending by barring any increase in the debt ceiling. This, too, is at odds with the party’s earlier views. The administration of George W. Bush sold its 2001 and 2003 tax cuts as Keynesian-style economic stimulus. Lawrence Lindsey, a top Bush adviser, even likened opponents of the tax cuts to President Herbert Hoover, whose obsession with balancing the budget in 1932 worsened the Great Depression.

But this is the consensus that many Republicans in effect now reject. In their view, the government has no more role meddling in the business cycle than in any other market. . . . . The new GOP views actually have a much longer pedigree: They are rooted in an intellectual contest that raged during the 1930s and 1940s, and had long been settled by the opposing side.

Before then, orthodox economics held that the economy was self-correcting. Just as the price of wheat or the wages of carpenters would always adjust to eliminate surpluses or shortages of either, so would wages throughout the economy adjust to eliminate temporary bouts of high unemployment. The Great Depression shattered that orthodoxy, as high unemployment became entrenched in the United States and around the world.

Many Republicans consider the tepid economic recovery an indictment of Keynesianism, and use the word as an epithet, as in “Keynesian utopia” (Sarah Palin) or “Keynesian bubble” (Ron Paul). They argue that aggressive fiscal and monetary stimulus have made things worse by generating uncertainty among firms and investors, and that austerity would put things right. They almost surely have it wrong.

[W]eak U.S. growth primarily reflects the difficulty of stimulating demand through lower interest rates at a time when the private sector and the financial system are trying to shed debt — exactly the sort of liquidity trap Keynes identified in the 1930s. Other countries have experienced similar stagnation in the wake of financial crises. As for austerity boosting growth, the International Monetary Fund has found that far more often it does the opposite . . . .

What would the Republican Party’s new economic ideology mean if the GOP nominee assumes the presidency in 2013? . . . . it’s one thing for a Republican candidate to inveigh against macroeconomic fine-tuning while stumping for tea party votes during the primaries. Once in office, presidents must think more carefully about the consequences of their decisions, both for the economy and reelection. At present, the public is far more worried about jobs than the deficit. Perry has criticized Obama for spending that would make “Keynes blush,” but as governor accepted Texas’s share of the money. Should he end up in the White House, policies that once looked treasonous might start to seem sensible.

Hopefully, we will not have to find out how the new ass backwards GOP approach to economics would work, but with Obama's refusal to lead and spinelessness, it could nonetheless turn out to be a less than healthy economic reality down the road.
Posted by Michael-in-Norfolk at Sunday, August 21, 2011

Just more reasons why it would be almost impossible for me to vote for any Republican candidate. And to think I used to vote a straight ticket.