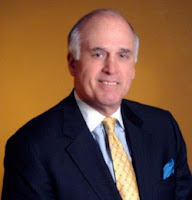 As is all too typical of our Christianist foes, they never worry about telling the truth when it comes to relentlessly working to keep LGBT Americans second class citizens. Now that Representative Sheila Jackson-Lee has reintroduced a federal Hate Crimes Bill, H.R 256, to Congress this past week, the lies and disingenuous spin are going into overdrive once more. One would think that the Ten Commandments had been amended to delete the Commandment against bearing false witness and lying. Among those putting out lies is Vision America, a thoroughly dishonest organization, with the false cry being touted by Rick Scarborough (pictured at left). While Scarborough depicts this legislation as a "thought crimes" bill citing a very different Canadian law as proof, the reality is that absent physical violence against an LGBT victim, the bill's provisions would never even apply. But then, Scarborough cares nothing about the truth. Here are highlights of his lies:
*
Preaching about to be Criminalized!!! Representative Sheila Jackson-Lee confirmed that she reintroduced a federal Hate Crimes Bill, H.R 256, to Congress this past week. We have to stop this from happening! This legislation is an immediate threat to our First Amendment right to free speech! We already have hate crime legislation. This legislation is designed to add homosexuals to existing legislation.
*
The tragic consequence of this legislation is that it forces law enforcement to assess motivation to a crime. Add to that the fact that Lady Justice is no longer blindfolded, meeting out justice to the criminals. Hate Crimes legislation forces Lady Justice to raise her blindfold to see if the person meets a certain criteria before justice is administered.
*
The small print is clear – you could be indicted if someone simply overhears you speaking out against homosexuality, or any other group protected by the law, and commits an act of violence as a result. There are two main groups that want this passed: the homosexual lobbyists and the Anti-Defamation League. This is a Jewish organization that wants to make it a hate crime to criticize Israel or the Jews in any way. They are responsible for the Hate Crimes laws in Canada, England, Western Europe and Australia. They have already succeeded in limiting free speech in those countries and are intent on doing the same here.
*
If we value our First Amendment right to free speech we will not let this pass without a fight. You can call your representative at 202-225-3121 or 877-851-6437 and leave a message telling them you want free speech preserved and not to vote for the Federal Hate Crimes Law.
*
We need to counter this effort by calling OUR representatives and making sure that they know Scarborough and those like him are not telling the truth and that this legislation IS needed. P.S. Note that the message is also anti-Jewish.
Posted by Michael-in-Norfolk at Sunday, January 18, 2009