All People are Created Equal Members of One Human Family 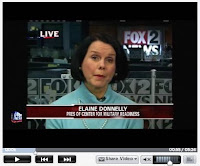 "All People are Created Equal Members of One Human Family" are the words that appear on a popular bumper sticker here in Key West and which proclaim the "Official Philosophy of Key West, Florida." Sadly, far too many in this nation fail to embrace that philosophy and prefer to stigmatize and denigrate those who are different. In my view, one of the biggest non-economic problems facing this country is the inability and/or outright refusal of some to understand that their own prejudices and/or religious beliefs have no place in shaping the civil laws or determining which citizens are given rights and which citizens have rights denied to them. This mindset is really what is behind "Don't Ask, Don't Tell" and unfortunately, this mindset is held by some in the military who forget that ours is a SECULAR society. A story in PageOneQ looks at the Christianist mindset held by some members of the military which needs to be rooted out and discredited. Here are some highlights:
*
BAGHDAD, Jan 21 (Reuters) - Many U.S. troops in Iraq were overjoyed to see President Barack Obama take his oath, but some were unhappy about one thing the Democrat has promised to do: permit gay and lesbian soldiers to serve openly.
*
But some of the 140,000 troops still in Iraq almost six years after the 2003 U.S.-led invasion to topple Saddam Hussein appear uneasy about the prospect. Specialist Joseph Watson, from Texas, was "pretty excited" to see America's first black president sworn in, he said, after watching Obama's inauguration on a big TV screen at the dining hall of Forward Operating Base Prosperity, in Baghdad.
*
But the 30-year-old was a lot less excited about Obama's inclination to repeal the ban on gay men and women serving. "Ah, I think that might cause a lot of problems," he said. "It's a big moral issue. It's giving the OK, saying that being gay is alright. Personally, I don't think being gay is OK."
*
Specialist Justin Scharan, from Washington State, battled to contain a smirk on his reddening face when asked his view. "I'm Christian, so I really don't believe it's a good thing. But if it happens, there's not much we can do," he said.
*
Someone needs to educate these soldiers and remind them that their duty is to defend the USA and its Constitution, NOT intolerant religious beliefs derived from a selective reading of the Bible.
Posted by Michael-in-Norfolk at Wednesday, January 21, 2009