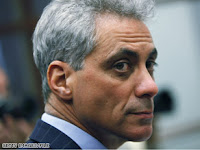 In another move that highlights that the eight year nightmare of the Bush/Cheney regime is over, the Obama administration has halted all pending regulations initiated by the Chimperator's regime. Hopefully, this move will stop the implementation of anti-science, Christianist driven, and deregulatory policies. Many people do not realize the damage that bad regulations can work on the legal process and on citizen rights. Especially, when the bureaucrats placed in charge are political appointees who were selected not for competence but rather ideology, a phenomenon all too prevailent under the Chimperator. Here are some highlights from CNN:
*
WASHINGTON (CNN)– President Obama has wasted no time handling the Bush administration's unfinished business. White House officials tell CNN Obama Chief of Staff Rahm Emanuel sent a memo Tuesday to all agencies and departments of the federal government. The memo halts further consideration of pending regulations throughout the government until a legal and policy review can be conducted by the Obama administration.
Posted by Michael-in-Norfolk at Wednesday, January 21, 2009