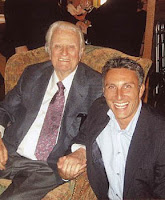 Lost in all the coverage of the inauguration today is a story in the Miami Herald about a leadership change at Fort Lauderdale's Coral Ridge Presbyterian Church which has been a driving force in the anti-gay agenda. Coral Ridge was founded by D. James Kennedy, a homo-hater of the first order and a founder of the "Moral Majority" that lighted the fires of the culture wars and set the stage for the Kool-Aid drinking crowd to begin the take over of the GOP. Coral Ridge under Kennedy was also among the most dishonest "Christian" organizations in terms of disseminating anti-gay lies and promoting the "choice myth." Kennedy continued selling books and videos recounting Michael Johnston's false "cure" claims literally up to the very day that the Southern Voice broke the story about Johnston's conduct in Tidewater Virginia - even though it was know among the the leaders of the anti-gay crowd that Johnston had had a "moral fall." When Kennedy died in 2007, my thoughts were ones of good riddance and that the world was now a better place. Now a grandson of Billy Graham has been selected as the new leader and he has stated that he intended to take Coral Ridge out of politics and the culture wars. One can only hope that such is in fact the case. Here are some story highlights:
*
When D. James Kennedy, the influential pastor who pushed conservative politics from the pulpit of Fort Lauderdale's Coral Ridge Presbyterian Church, died in 2007, members lost the fiery leadership of the man who built it from a congregation of a few dozen to more than 10,000 with internationally viewed television and radio programs.
*
Now, successor William Graham Tullian Tchividjian, 36, grandson of evangelist Billy Graham and head of Margate's relatively small New City Church, is ready to take Coral Ridge in a new direction. . . . he is expected to modernize the thinking of the church over which Kennedy presided for more than five decades and take it back to the basics of teaching the Bible instead of reigniting the culture wars.
*
Energetic and easygoing, he will be a stark contrast to the often stiff and formal Kennedy, people familiar with the church say. Kennedy, a notable member of the Moral Majority before its dissolution, rallied against same-sex marriage and evolutionary theory and sought to ``reclaim America for Christ.''
*
''The impression out there of Coral Ridge is that they are a church that is stuck in the past and unwilling to change,'' said Tchividjian, a father of three who lives in Coconut Creek. ``This move on their part corrects that assumption.'' . . . 'He is not going to be interested in addressing cultural issues ideologically,' Wood said. ``His interest isn't getting up there and waving the American flag.''
*
That may reflect a larger shift as the vanguard of the traditional religious right passes the torch to a new generation for whom the old lines of the culture wars are not as impenetrable as they used to be, say scholars of religion and politics. Many theologically conservative Christians voted for Barack Obama, whose inauguration invocation will be given Tuesday by controversial pastor Rick Warren of California's Saddleback Church, a vocal opponent of same-sex marriage.
*
''Polling data has shown that a lot of Americans are not comfortable with politics in the pulpit,'' said Rob Boston of the Washington, D.C.-based Americans United for Separation of Church and State. ``It could be the beginning of a time when people start to look to churches for more traditional reasons, such as fellowship, spirituality and a connection to God.''
Posted by Michael-in-Norfolk at Tuesday, January 20, 2009