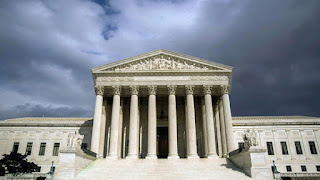 While Christofascists dream of eventually having the U.S. Supreme Court over turn the Obergefell ruling that extended same sex marriage nationwide, in  the short term they hope to use death by a thousand cuts to diminish the expnasi.ve rights won by LGBT citizens.   Today, that effort hit a road block as the U. S. Supreme Court refused to take a case out of Indiana (an anti-gay state by any measure).  The instant case sought to roll back the ability of same sex parents to be named as the parents of children on birth certificates. Indiana's Republican Attorney General, Curtis Hill, contended “common sense” should allow states to presume the child born to lesbian parents had a biological father which would override the rights of the birth mother's same sex spouse to be named on the birth certificate. Of course, nowhere in the Christofascist agenda is any concern of how this could adversely impact children and their health care coverage or inheritance rights.  The sole concern is harming gays with zero thought to children in need of stable, two parent homes.  A piece in the Washington Blade looks at the court's action.  Here are article highlights:

The U.S. Supreme Court, which many predicted would roll back LGBTQ rights with its new 6-3 conservative majority, has turned down a request to hear a case that would have undercut the guarantee of full marriage equality for same-sex couples nationwide.

In its orders list Monday, the court without explanation signaled it had denied certiorari in the case, known as Box v. Henderson, which seeks to undermine the Obergefell v. Hodges decision in terms of birth certificates for children born to lesbian parents.

Despite the widely held perception marriage equality for LGBTQ families is settled law and beyond any challenge, the question before the the court was squarely framed as challenge to same-sex marriage and asked the court to “take this case to address whether Indiana’s paternity-presumption law is consonant with Obergefell.”

The petition, which had been pending since June, was an early test for newly confirmed U.S. Associate Justice Amy Coney Barrett, whom many feared would undermine LGBTQ rights from the bench given her publicly stated religious views against same-sex marriage.

Barrett’s views on the petition, however, aren’t known. It takes of vote at least four justices to agree to take up a case, but the recorded tally for any petition isn’t publicly recorded.

The petition was filed by the state of Indiana, which sought in cases of children born to same-sex parents who are women to refuse to place the name of a non-birth mother on the child’s birth certificate, even if the two same-sex parents in the relationship are married to each other.

In a filing before the Supreme Court on Nov. 23, Indiana Attorney General Curtis Hill contended “common sense” should allow states to presume the child born to lesbian parents had a biological father.

The state of Indiana has continuously failed in convincing courts to agree to its demands. State courts had ruled the state must place the names of both lesbian parents on their children’s birth certificates consistent with Obergefell. When the case reached the U.S. Seventh Circuit Court of Appeals, the appellate court affirmed those decisions and concluded the law must be applied the same for different-sex and same-sex parents.

In an opposition brief to the Supreme Court on Nov. 10, lawyers with the National Center for Lesbian Rights and other attorneys maintained the Seventh Circuit “correctly construed state law.”

“Based on its analysis of Indiana statutes and case law, the court of appeals found that Indiana law affords a birth mother’s husband the right to be listed on the birth certificate of a child born during the marriage, including when a child is born through donor insemination and it is known that the husband is not the child’s biological parent,” the brief says. “Having made that determination, the court of appeals held that…the same rule must be applied to married same-sex couples.”

Based on the Supreme Court’s decision to turn down the challenge, however, justices appeared to have signaled the cases are no different and reaffirmed Obergefell and Pavan’s guarantee same-sex parents to have their names on the birth certificates of their children.

“The U.S. Supreme Court has now made it clear to everyone that LGBTQ Hoosiers should have the same God-given privileges as everyone else, which includes having job security, getting married, and starting a family with the person they love,” Anderson said. “The Indiana GOP is still not long-removed from the days of Mike Pence and RFRA, and we suggest Hoosier Republicans get with the times and stop creating useless political theater that does nothing but destroys our trust and divides the state.”

Posted by Michael-in-Norfolk at Monday, December 14, 2020