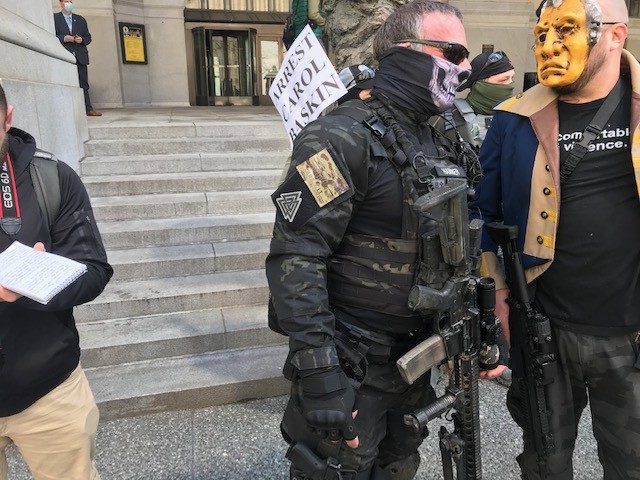 When out of state far right Neo-Nazis and white supremacists invaded the grounds of the University of Virginia and terrorized the city of Charlottesville, Virginia, in 2017, Donald Trump could never bring himself to condemn the far right extremists and ultimately said there were "very good people" on both sides of the protests.  Tell that to Charlottesville residents or supporters and alumni of the University who remain livid to this day that outside elements invaded Charlottesville. Now, we are again seeing Trump unwilling to condemn the far right protesters showing up in state capitals to protest stay at home orders supported by medical experts.  Many of these protesters look much like those who invaded Charlottesville: armed militias, white supremacists, and anti-government extremists who Trump has incited through tweets.  These protesters consist of the deplorables that Hillary Clinton so aptly described. A piece in Huffington Post looks at Trump's coddling of dangerous extremists, many of whom are armed.  Here are excerpts:

President Donald Trump on Sunday defended right-wing protesters he appeared to previously encourage to rally across the country for states to reopen the economy despite governments and health experts deeming it not safe enough to do so.

Since last week, thousands of protesters in more than a dozen states have taken to the streets to demand stay-at-home orders be lifted, even though public health officials have warned that lifting restrictions too early could lead to a spike in cases.

The protesters have been mostly right-wing followers, anti-vaccination advocates and gun rights activists who in some photos can be seen standing close together without masks or gloves, in defiance of the social distancing guidelines meant to slow the spread of the virus and flatten the curve.

At Sunday’s White House coronavirus briefing ― an event that the president has mostly used to campaign and push misinformation ― Trump was asked what his advice would be to protesters who want to lift states’ stay-at-home orders.

“You’re allowed to protest. … I watched a protest and they were all six feet apart, I mean it was a very orderly group of people,” Trump said, despite photo evidence of many of these rallies showing otherwise. “But you know, some governors have gone too far. Some of the things that happened are uh, maybe not so appropriate, and I think in the end it’s not gonna matter because we’re starting to open up our states.

“I see protesters for all sorts of things, and I’m with everybody,” he said. Asked on Sunday if he was concerned that his tweets helped incite violence against the governors ― some of whom are receiving death threats from protesters ― Trump immediately denied it.

“I’ve seen the people, I’ve seen the interviews of people. These are great people,” Trump said. “Look they want to get ― they call cabin fever, you’ve heard the term ― they’ve got cabin fever.

When the reporter who asked the question pointed out there have also been Nazi flags flown at these rallies, Trump repeated: “No, no.” . . . . These people love our country and they wanna get back to work.”

Trump’s enabling response to the protesters echoed his handling of the 2017 Unite the Right rally in Charlottesville, Virginia ― where neo-Nazis protested against taking down Confederate monuments in a violent white supremacist rally that left one counter-protester dead and dozens more wounded.

After the Charlottesville violence, Trump refused to single out the activity of white supremacists and instead falsely claimed that there was “bigotry and violence on many sides.” He then doubled down on his comments, equating Nazis with people who are against fascism by saying there were “very fine people on both sides” at the rally.

Whether my Republican "friend" like it or not, Trump's main appeal to his base is his open racism and refusal to condemn the most extreme elements of the far right, people to whom such "friends" have tied themselves through their continued support of Trump.

A column in the Washington Post looks at the hypocrisy and derangement of these protesters:

We haven’t heard from them much in the past 3½ years. Not that they shouldn’t have found plenty of fodder for outrage: record deficits and debt; an autocrat in the White House who regularly claims extra-constitutional authority; economic policies that tilt heavily in favor of the wealthy and big business.

Tea party activists have looked the other way on all of these things throughout the presidency of Donald Trump. But now they are appearing again in state capitals across the country, screaming and waving their “Don’t Tread on Me” banners to vent at the lifesaving measures that governors have taken in the face of an epidemic that has already caused upward of 40,000 deaths in the United States.

There is a legitimate — and reasonable — debate to be had about how much economic pain the country should be willing to bear to bring the epidemic under control.

But that is not what we are hearing in their nihilistic fury. Some of them carry Confederate flags and assault weapons as they protest. Theirs is a doctrine fueled not by high-minded principles, but by conspiracy theories and populist resentment.

Tea party 2.0 is proposing a tri-cornered suicide pact: Give them liberty from stay-at-home orders and give them death. And while they are at it, endanger the lives of everyone around them as well.

[P]olls show the vast majority of Americans want restrictive measures to remain in place to fight the virus.

Two-thirds of respondents in a poll that Pew Research Center released last week said they were more concerned that states would move too quickly to lift the measures, as opposed to only 32 percent who said they feared it would not happen fast enough. In an April 8 Quinnipiac University poll, 81 percent said they would support a national stay-at-home order, rather than leaving it up to the discretion of the states.

The Quinnipiac survey also showed that nearly three-quarters approve of their governors’ handling of the crisis; by comparison, only 46 percent felt positive about Trump’s performance.

Haha I love how you crossed out President. IMPOTUS does not deserve the title
And all these ‘protesters’ are the same idiots who were in Charlottesville. Astroturfed to pretend Americans are all for this.
Sounds about White.

I try to always strike through "president" before Der Trumpenfurher's name. He's not my president and does not deserve the title or a single shred of respect. He's white trash with money.