Northam: Business Reopenings Must Use Science, Data and Testing 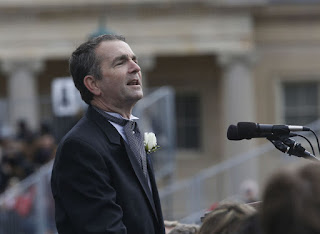 Here in Virginia, Governor Ralph Northam - the only governor who is a doctor and who, knowing him as I do, actually cares about Virginians unlike the occupant of the White House and Virginia Republicans - is resisting Der Trumpenführer's calls to rashly "reopen" the economy and gamble with individuals' lives. Recent polling shows that 76% of Virginians believe Northam is doing a good job, with the other 24% likely representing the Christofascists and white supremacists who make up the majority of the Virginia GOP's core base. Infections and deaths in Virginia are still rising with the peak projected to come during the next three to four weeks.  Clearly, this is NOT the time to end social distancing and allow crowded gatherings of people to resume.  A piece in the Virginian Pilot looks at Northam's handling of the crisis despite the irresponsible voices calling to reopen all businesses (note the reference to The Family Foundation, a Christofascist hate group in league with Virginia Republican lawmakers) .  Here are article excepts:

The calls for Virginia’s governor to come up with a plan for reopening the state sooner rather than later are growing louder — from [Republican] elected officials, advocates and residents — and President Donald Trump’s new guidelines to state leaders are likely to cause more voices to join the chorus.

But the pressure to release such a plan comes as Virginia appears to be deep in the throes of the coronavirus pandemic, with the Department of Health reporting the largest increase in cases on Friday, up 602 from the previous day. The state appears not to have yet reached a peak in cases that health officials have projected will come between late April and late May.

At least 22 million Americans have filed for unemployment since the start of the pandemic, with over 410,000 filing in Virginia. Northam on Wednesday extended closures for nonessential businesses such as movie theaters and gyms to May 8, even as his stay-at-home order remains in effect until June 10.In statements, on phone calls and on social media, Republican state lawmakers say it’s time to get back to work and are asking Northam to begin the process of reopening Virginia.But Northam and health officials have warned that reopening anything too soon could overwhelm hospital capacity and do more harm than good.

“I assure you, I want to get back to a place where all businesses can be open, and we will get there, but we have to do it with deliberation, using science, data and testing to make sure we do it safely,” Northam said Friday at a press conference in Richmond. “Otherwise, cases will spike, we’ll be right back where we started, and all the sacrifices people have already made will have been for nothing.”

[T]he number of confirmed cases in Virginia has surpassed 7,000, but less than 1% of Virginians have been tested for COVID-19 as testing kits and personal protective equipment continue to be difficult to come by.

Most Virginians seem to think Northam — a pediatric neurologist who treated wounded soldiers during Desert Storm — is doing a good job managing the coronavirus pandemic. A Virginia Commonwealth University poll released Tuesday showed 76% of respondents approved of his handling the crisis.

On Monday, state officials unveiled a new University of Virginia coronavirus model that projected if social distancing restrictions are lifted on June 10 and the state returns to a “halfway” version of normal, the forecasted peak would come around mid-August, with median projections showing more than 10,000 confirmed cases a day.

The UVA researchers stressed that social distancing has significantly slowed the spread of the coronavirus, avoiding the worst-case scenarios that earlier projections showed. Lifting such restrictions too soon, they warned, could quickly lead to a second wave.Northam said Friday that staffing, testing kits and personal protective equipment remain hard to come by, and that’s partly as a result of a lack of guidance from the federal government.

“Do we have enough (personal protective equipment) to say that if there’s a flare up, or if that curve sharpens, we have the supplies necessary not only for the hospitals, but for the first responders, our nursing homes? We’re not there yet,” he said.

Sen. Steve Newman, R-Bedford, called Northam’s strategy “simple-minded thinking” on a video call with the Family Foundation, a conservative pro-life organization [sadly the media never calls TFF what it is in fact], on Thursday.On a call organized by the Democratic Party of Virginia on Tuesday, Dr. Wendy Klein, an associate professor at VCU’s Department of Internal Medicine, said any attempts to reopen the economy should be done in small steps and only if robust testing and contract tracing is available.Maryland Gov. Larry Hogan, a Republican whose administration has coordinated closely with Northam’s and Washington D.C. Mayor Muriel Bowser’s staff during the coronavirus pandemic, said plans to move into a “recovery” phase would be laid out in greater detail next week, The Baltimore Sun reported.

Hogan said the recovery phase would include four necessary steps: a goal of 10,000 tests a day; increasing hospitals’ capacity to treat COVID-19 patients; boosting the state’s supply of personal protective equipment; and building a 1,000-person operation to trace the contacts of sick people, The Sun reported.