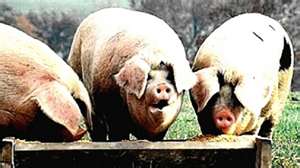 There's a reason Democrats sought to have oversight in how the small business Paycheck Protection Program (PPP) would be administered (they failed due to GOP intransigence) - they knew large businesses would swoop in like pigs at a trough and leave actual small business getting nothing.  Sadly, that is precisely what has happened as stories in the Orlando Sentinel and CNN Business are reporting.  Sadly, the GOP agenda of aiding the rich while leaving the poor and small business to wither goes on.  One large chain - likely fearful of a customer backlash - has said it is returning the funds, but most of the hogs at the trough have the attitude of screw the little guys and the mom and pop operations who most desperately need these loans.  Would that a list were published naming these large companies so that average Americans could boycott them for their greed.  First this from the Orlando Sentinel (note how many of these companies spent millions buying back stock last year):

The Pennsylvania investment firm that owns the Ritz-Carlton Coconut Grove in Miami has applied for as many as 48 taxpayer-backed loans under an emergency program meant to help the nation’s smallest businesses hang on to their employees through the coronavirus pandemic.

A Maryland hotel company that did more than $1.5 billion in revenue last year has applied for more than 50 loans — and been approved for about 10 so far.

And Winter Park’s Ruth’s Hospitality Group Inc. — the parent company of Ruth’s Chris Steak House that made $42 million in profits last year and spent $41 million buying back stock and paying dividends to shareholders — revealed Monday that it has received $20 million through two small business loans.

Across the country, hotel and restaurant companies of all sizes are tapping into the “Paycheck Protection Program,” the $350 billion fund that Congress set up specifically for small businesses as part of an overall $2.2 trillion economic rescue plan.

Midsized and large hoteliers and restaurateurs are qualifying for the potentially forgivable loans — more than one, in many cases ― under special rules written into the program at the request of industry lobbyists, who argued that hospitality businesses have been uniquely devastated by coast-to-coast travel bans, shutdowns and shelter-in-place orders.

And now — as congressional leaders negotiate another spending bill that would add $250 billion or more into the PPP program, which officially ran out of money by Thursday morning — hotels and restaurants are pressing lawmakers to loosen the rules around how they are supposed to spend that money.

They have asked to spend less of their PPP loan proceeds on wages for workers and more on other expenses, such as mortgage principal or franchise fees that get paid to larger companies like Marriott International Inc. and McDonald’s Corp. They want to wait longer before they must rehire employees who have already been furloughed or laid off.

Choice Hotels International Inc., the lodging industry giant that has franchised more than 7,000 hotels under brands like Clarion and Comfort Inn, has said it was one of the companies that lobbied lawmakers for that provision.

That exception is how a business such as Dave & Buster’s Entertainment Inc. has been able to apply for a PPP loan. The restaurant and arcade operator — which spent more than $300 million last year on stock buybacks and dividends — said in investor filings that it has applied for $10 million, the maximum amount for any single loan.

Other companies have applied for more than one loan, including Condor Hospitality Trust, which owns 15 hotels, including a Hampton Inn & Suites in Lake Mary.

That points to one of the problems with letting larger companies into a small business lending program when the there is only a finite amount of money to go around, said John Lettieri, the president and CEO of the Economic Innovation Group, a Washington-based think tank. Small businesses could end up getting crowded out of the only lifeline they have.


Small businesses and employees in general mean nothing to Congressional Republicans despite their lip service to the contrary.

In fewer than two weeks, the funds in the Paycheck Protection Program (PPP), a $349 billion stimulus effort heralded as a means to help the nation's small businesses pay their workers and keep their operations running, were exhausted. Proprietors like Richardson, however, didn't even get a taste of the spoils: Her rejection letter came midday Saturday.In recent days, it's been revealed how large chunks of the funds were gobbled up by chain restaurants, hoteliers and publicly traded corporations."It's a reminder to small businesses that our voices are dampened," Richardson told CNN Business. "What are we doing this for? Why are we in business just to be told we're not good enough because we're not big enough?"As a result of a heavily lobbied exemption, larger food-service operations landed $10 million loans from the PPP. These include Potbelly (PBPB) Sandwich Shop and Shake Shack (SHAK), which has upward of $100 million in cash on hand, as well as Fiesta Restaurant Group Inc (FRGI)., the owner of Taco Cabana.Kura Sushi USA Inc (KRUS)., the largest revolving sushi chain in the US, disclosed a nearly $6 million loan. Operators behind the Ruth's (RUTH)Chris steakhouses and the J. Alexander's (JAX) restaurant chains received loans of $20 million and $15.1 million, respectively.
Other small business owners, such as Liana Tremmel, fear their situations are growing even more precarious.
The Chicago-area dentist, applied for a $46,000 PPP loan that would have helped to pay employees and get her Regency Dental Care back to fuller operations when stay-in-place restrictions are scheduled to lift in two weeks.
When she heard the news that the PPP money had been depleted, Tremmel was crestfallen.

"You do everything by the book; you're trying to live the 'American Dream' and come to this country, work hard and do your part in the economy," said Tremmel, who emigrated from Romania more than 15 years ago to pursue a dental career and eventually purchased her own practice. "But when it's the other way around to help us in this crisis? It's not fair."


One can only hope that a full list of large companies who received these loans meant for small businesses will become available so that consumers can boycott them  and punish them for their obscene greed.
Posted by Michael-in-Norfolk at Monday, April 20, 2020