Trump Is Asking Americans to Play Russian Roulette With Their Lives 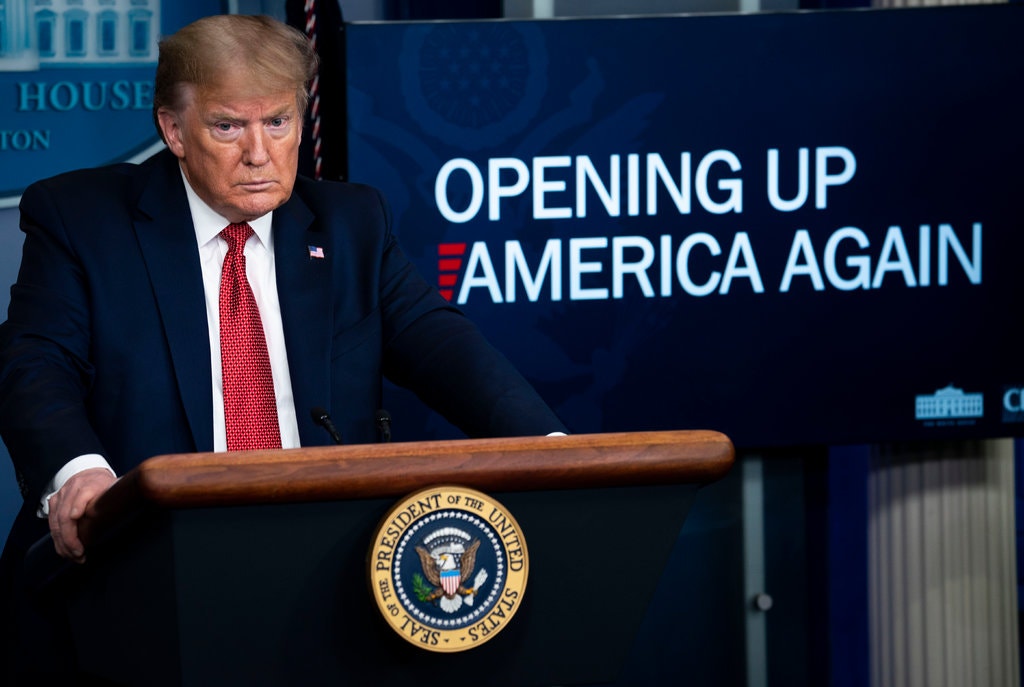 Since Donald Trump cares for no one but himself - and his re-election chances in particular - it should come as no surprise that he is in a rush to reopen the economy to (i) get things back to what passes for normal, and (ii) most importantly, in the hope Americans will forget how badly he bungled the nation's response to the pandemic in the critical first six weeks of its initial arrival in the USA.  To achieve his goals, he is asking Americans to play Russian roulette with their lives and the lives of loved ones. Medical experts rightly fear a premature reopening of the economy could bring a second wave of infections and more deaths - especially given America's continued horrendous shortage of testing capacity.  Sure, I want things back to "normal" - with my husband's salon closed, we have lost half our income (yes, we are luckier than many) while the expenses of our properties, the husband's health insurance and other costs continue.  I'd like to not have to meet clients armed with a mask and virus killing wipes - wondering all the time if one of them is infected and doesn't yet know it - and feeling some fear during what used to be a routine business exercise for me.  Without wide scale testing, we cannot know who might pose a danger, yet Der Trumpenführer doesn't care.  I'm smart enough to know that my life (and that of my family members) means absolutely zero to him.  Sadly, his base is too stupid to grasp this reality. It's all about him and no one else.  A column in the New York Times looks at Trump's selfish and dangerous agenda.  Here are highlights:

With these three short tweets last week, President Trump attempted to kick off the post-lockdown phase of America’s coronavirus crisis. It should be called: “American Russian roulette: The Covid-19 version.’’

What Trump was saying with those tweets was: Everybody just go back to work. From now on, each of us individually, and our society collectively, is going to play Russian roulette. We’re going to bet that we can spin through our daily lives — work, shopping, school, travel — without the coronavirus landing on us. And if it does, we’ll also bet that it won’t kill us.

More specifically: As a society, we will be betting that as large numbers of people stop sheltering in place, the number of people who will still get infected with Covid-19 and require hospitalization will be less than the number of hospital beds, intensive care units, respirators, doctors, nurses and protective gear needed to take care of them.

Because it is clear that millions of Americans are going to stop sheltering in place — their own President is now urging them to liberate themselves — before we have a proper testing, tracking and tracing system set up.

[A]s individuals, every person will be playing Russian roulette every minute of every day: Do I get on this crowded bus to go to work or not? What if I get on the subway and the person next to me is not wearing gloves and a mask? What if they sneeze? Do I get in the elevator at the office if there is another person on it? Do I go into the office lunchroom or not? Do I stop for a drink at this bar, where the stools are six feet apart, or that crowded one my friends chose?

What will be so cruel about this American version of Russian roulette is how unfair it will be. Some people will have no choice but to take the subway or the bus to work. Some people will have to send their kids back to school because they can’t afford to stay home from work. Some bosses will demand that their employees show up to reopen their workplace, but some of those employees may be afraid to come back. Do you fire them? Do they bring a lawsuit against you if you do, or do they go on Twitter and post a picture of how closely together you forced them to work — six inches apart, not six feet?

“Liberate”? Think about the use of that word. We were not in jail! We were not doing something wrong! We were doing what our president, governor, mayor, and national epidemic experts told us to do: behave responsibly and shelter in place to break the transmission of this virus.

Trump was cynically trying to curry favor with his base by implying that the Democratic governors, following his own national guidelines, were unfairly locking people up, depriving them of their livelihoods. Is there anything more irresponsible that this president could do, after weeks of complimenting the American people for how they pulled together and sacrificed to shelter in place — patriotically doing their part to bend the curve of this virus?

So, folks, forget about all those White House briefings. You don’t have to tune in another day. When the president is calling on governors to “let their people go” before comprehensive testing facilities are in place, he is basically saying that, until there is a vaccine, we are betting on herd immunity. Achieving herd immunity requires that more than two-thirds of a community be immune, a process that could involve many more deaths, if proper preparations are not in place.I just know three things:

First, this is the bet Trump is urging you to make in his “liberate” tweets — when he should be ordering out the National Guard and mobilizing American industry to get testing everywhere.

Second, this bet will fall very unfairly and unevenly in our society, when so little testing and tracing is in place.

And third, if this is the future, every business, restaurant, hotel, theater, sporting facility, factory, nonprofit and government office needs to ask itself: What does my business look like when, on the best days, the responsible people coming to my door will be wearing a mask, gloves, distancing six feet apart and volunteering to have their temperature taken before they enter, and the irresponsible ones won’t be? How do I handle that? . . . .Because that will be our economy until we have a vaccine or have established herd immunity.