GOP Congressman: Mitch McConnell is "the Marie Antoinette of the Senate" 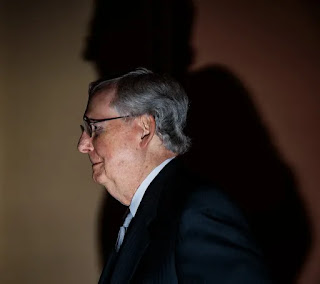 After Donald Trump, the man who has done more damage to America and exhibited more disregard of the U.S. Constitution is the ever despicable (and self-enriching) Mitch McConnell.  Now, with states struggling financially with the impact of the coronavirus pandemic, McConnell has said that he would prefer that states go bankrupt rather than have the federal government provide financial assistance.  This, from the man who had no qualms giving away $1,5 trillion to the extremely wealthy and large corporations, exploding the federal deficit in the process.  Combined with McConnell's protection of Trump and putting the GOP above the country, McConnell deserves the nickname "Moscow Mitch."  He needs to be voted out of office and he and his wife investigated.  A piece in Salon looks at even a Republican calling McConnell out. A piece in Salon looks at McConnell's Marie Antoinette comparison (which probably is slanderous toward Marie Antoinette).  Here are excerpts:

Senate Majority Leader Mitch McConnell, R-Ky., caught fire from both parties after telling the conservative radio host Hugh Hewitt on Wednesday that he would rather see states declare bankruptcy — which they cannot do — than wait for expanded federal aid that would demand further deficit spending.

"We all have governors regardless of party who would love to have free money," McConnell said. "I think this whole business of additional assistance for state and local governments need to be thoroughly evaluated."

"To say that it is 'free money' to provide funds for cops, firefighters and healthcare workers makes McConnell the Marie Antoinette of the Senate," King tweeted.

McConnell — who nicknamed himself the "Grim Reaper" — made the remarks the day after the Senate passed a relief bill that excluded the hundreds of billions of dollars in federal aid requested by a bipartisan coalition of governors.

"These continuing losses will force states and territories not only to make drastic cuts to the programs we depend on to provide economic security, educational opportunities, and public safety, but the national economic recovery will be dramatically hampered," Gov. Larry Hogan (R-MD), chairman of the National Governors Association, and Gov. Andrew Cuomo (D-N.Y.), vice-chair, wrote in a joint letter to Congress last week.

Though McConnell said he prefers the bankruptcy route, President Donald Trump has said he wants to add a relief package for state and local governments in the next round of emergency funding.

King and Schumer both veterans of Congress  — King has represented parts of Long Island since 1993 — have teamed up against McConnell before. In the wake of last summer's mass shooting at a San Antonio Wal-Mart, the pair called on McConnell to call an emergency session to vote on a background check bill that passed in the lower chamber.

McConnell's Senate office could not be immediately reached for comment. His campaign redirected Salon's request to his Senate office.