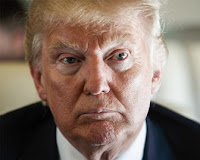 A piece in the Washington Post looks at who is funding and organizing the anti-lock down protests and the reality that, while aimed at looking like a "grass roots," they are being backed by billionaires, including some of the most far right vulture capitalists.    True to form, Trump devotees are being duped into playing a role in Trump's re-election strategy which, as in 2026, has a strong racist element and is intended to mask Trump's epic failures in handling the coronavirus pandemic and the fact that he doesn't actually give a rats ass about the fools being duped into participating in the anti-lock down protests.  As a lengthy column in the New York Times lays out, it is all part of a cynical strategy to use racism (it is no coincidence that the anti-lock down protests all feature Confederate flags even in places like Michigan) and rural voter hatred of educated and culturally elite cities to boost right wing turnout in November 2020.  It's cynicism is disgusting, but then again, Trump (like his billionaire sycophants) only cares about himself.  Here are column highlights:

President Trump has chosen his pandemic re-election strategy. He is set on unifying and reinvigorating the groups that were crucial to his 2016 victory: racially resentful whites, evangelical Christians, gun activists, anti-vaxxers and wealthy conservatives.

Tying his re-election to the growing anti-lockdown movement, Trump is encouraging a resurgence of what Ed Kilgore, in New York magazine, calls “the angry anti-government strain of right-wing political activity that broke out in the tea-party movement” — a movement now focused on ending the virus-imposed restrictions on many aspects of American life.

Jeremy Menchik, a political scientist at Boston University, . . . . makes the point that anti-quarantine protests . . . will distract the electorate. If the election is a fight between Trump vs governors who refuse to open their economies, Trump doesn’t have to defend his record on Covid-19. He’s an advocate for liberty!

Casting the coronavirus epidemic as a wedge issue, Trump is playing both ends against the middle, in an attempt to veil his own inconsistencies. Following up on this idea, Noah Rothman, associate editor of Commentary, asked on April 20: “Can Trump Be All Things to All People?”

The calculation underlying Trump’s “liberate” crusade was revealed in a comment on the Facebook page of Pennsylvanians Against Excessive Quarantine:

The eastern border, Philly, and the western border Pittsburgh, is what is causing the state to stay shut down. What about the rest of us??

In other words, Trump and his followers want to place the onus for the social and economic restraints that are still in effect in much of the country on cities, many of them heavily black, where the coronavirus has been most destructive.

Along similar lines, Carol Hefner, co-chair of Trump’s 2016 campaign in Oklahoma and an organizer of an anti-lockdown protest in Oklahoma City, told KOMO TV News on April 15: “We’re not New York. Their problems are not our problems.”

Trump continues on a well-trodden path as he promotes the corona-liberation movement — stigmatizing inner-city dwellers, scapegoating “foreigners” and blaming the Covid-19 pandemic on China.

The demonization of China, Celinda Lake, a Democratic pollster, noted in an email, . . . is central to his strategic racism. Trump uses this wedge to solidify and turn out his base and persuade white, blue collar voters. Trump believes strategic racism worked for him in 2016 so why not 2020?

On April 21, Trump resumed his assault on immigrants, issuing an order blocking new green cards and instigating a 60-day moratorium on immigration: “I will be issuing a temporary suspension of immigration into the United States,” he said during the daily White House coronavirus briefing. “By pausing, we’ll help put unemployed Americans first in line for jobs.Steve Schmidt — a former Republican consultant and prominent Never Trumper who served as a senior adviser to John McCain’s 2008 presidential bid — described the shape he saw Trump’s 2020 re-election drive taking. As the “administration continues to lie, fumble and flounder,” Schmidt wrote in an April 17 Twitter thread, . . get ready for the noxious blend of Confederate flags, semiautomatic weaponry, conspiracy theorists, political cultists, extremists and nut jobs coming to a state Capitol near you.

The 2020 incarnation of the Tea Party, Schmidt continued, will be stoked by Trump every step of the way as they help make the air fertile for his blame gaming, scapegoating, evasions of responsibility, populist fulminations and nationalist incitements. They will be on TV every night storming the battered ramparts of our politics and civics.

Thomas M. Nichols — a professor at the Naval War College who abandoned the Republican Party in 2018 — succinctly described on Twitter on April 19 how Trump’s alignment with anti-shutdown forces works: This is perfect for the Angry White Trumper: People in blue states, guided by the elites and know-it-alls they hate, stealing a march on them by being better and more civic minded citizens than they are. So now it’s ‘fighting tyranny,’ because they’ve got nothing else.

The key battleground states in the Midwest are rich soil for the tactics outlined by Lake, Schmidt and Nichols.

The racial divisions in the Midwest, Austin writes, were crucial to the outcome of the 2016 election: Racially divided regions such as Detroit, Cleveland, and Milwaukee fed the rise of Donald Trump, with his scapegoating of people of color and nostalgic appeals to white working-class voters yearning for a return to the “good old days.”

Bringing the issue back to the present election, Austin pointed out: In our state capital of Lansing, an April 15 rally ostensibly protesting social distancing measures was notable for its participants’ use of Trump and Confederate iconography.

The pandemic has, in turn, inspired a renewed Christian right critique of America’s cities. . . . . the unbelievers whom Erickson contends populate American cities are getting their comeuppance: “Those who’ve had a good life now outside the presence of God will find nothing good while those who believe will live in splendor.”

Trump is egging on lockdown protesters in order to generate enthusiasm and drive turnout on Election Day, but Ron Brownstein, writing in The Atlantic, warns that this gambit could backfire.

The Coronavirus pandemic appears destined to widen the political divide between the nation’s big cities and the smaller places beyond them. And that could narrow Donald Trump’s possible pathways to re-election.

Will Bunch, a columnist for The Philadelphia Inquirer, is more outspoken in his critique of Trump and the coronavirus liberation movement, arguing that the protesters are unknowingly fronting for the wealthiest Americans: Right-wing special interests, like the billionaire family of Education Secretary Betsy DeVos, are terrified that the 22 million unemployed will demand a social welfare state.

Their goal? To “shift blame away from Trump’s multiple failures on the coronavirus and instead onto public-health-minded governors.”

“These billionaires and millionaires,” Bunch continued, “have zero moral qualms about working with some of the worst white-supremacists or neo-fascists in order to make sure a crowd turns out.”

Trump faces the cold reality of a health care crisis — and that voters may not give him as much leeway as in the past: This may be one instance in which reality and personal experience stand up to political bluster and misstatements. Undoubtedly, many Trump supporters will stick with him and regard the public health response to the Covid-19 pandemic as a costly overreaction. But there will also be political moderates and independents who regard the administration and president as increasingly incompetent in a domain in which it really matters.

More than anything, Trump is a gambler and he is taking a high risk approach to re-election. Given public wariness of his handling of the pandemic — and much else — and the recent drop in his favorability rating, he may have no other choice than to stake his political future on his ability to turn the anger and frustration of his credulous audience to his advantage one final time.

Posted by Michael-in-Norfolk at Wednesday, April 22, 2020