Will the Virginia GOP Kill Marijuana Decriminalization Again in 2019? 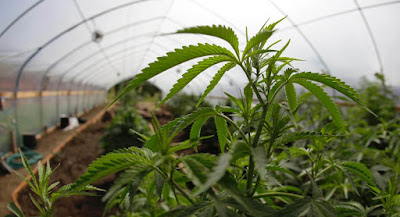 More and more states are reforming their marijuana laws to allow medical marijuana, decriminalizing simple possession and/or reducing penalties.  Virginia has lagged behind this changing reality largely thanks to Virginia Republicans.  Why the resistance?  Actually, it is quite simple.  For years Virginia Republicans have sought to disenfranchise as many minority voters as possible be it under the smoke screen of preventing non-existent voter fraud, using Virginia's draconian drug laws to saddle minority voters with felony convictions that deprive them of the right to vote, or other disingenuous lies and ruses. As note, a significant part of this GOP agenda has been the disproportionate arrest of blacks for marijuana possession.   Among the worse offenders in this unconscionable agenda has been the City of Norfolk where blacks were far more likely to suffer arrest and conviction than whites.  Now, the City of Norfolk has changed its position and is calling for the decriminalization of simple possession of small amounts of marijuana for recreational use.  Polls indicate that a majority of Virginians want decriminalization of possession of small amounts of marijuana for personal use.  However, the goal of the Virginia GOP ceased to be furthering the wishes of a majority of the population many years ago.  A piece in the Virginian Pilot looks at what may transpire in the 2019 session of the Virginia General Assembly.  Here are highlights:

When it comes to marijuana, Virginia has lagged behind many states where the drug has been decriminalized or legalized for recreational use.

With lawmakers approving an expansion of the state's medical marijuana program in 2018, supporters of decriminalization are hoping that momentum will continue in 2019. But Virginia Republicans don't appear willing to support decriminalization.

As the General Assembly gears up for a new legislative session starting Jan. 9, Democratic state Sen. Adam Ebbin has submitted a bill to decriminalize simple marijuana possession — defined as ½ ounce or less — and provide a maximum civil penalty of $50 for a first violation. The current law carries a jail sentence of up to 30 days and a maximum $500 fine for a first offense.

"Will Virginia eventually decriminalize personal possession of marijuana? Yes. Will it be in 2019? That's very unlikely," said Jenn Michelle Pedini, executive director of the Virginia chapter of the National Organization for the Reform of Marijuana Laws.

Legislation to decriminalize possession of small amounts of marijuana has been introduced in Virginia for years, but has always died in committee. Pedini said the House and Senate Courts of Justice committees are made up largely of Republicans — some with law enforcement backgrounds — making it difficult to build support for decriminalization or legalization.

Ebbin, however, said a criminal charge for marijuana possession can have lasting ramifications, including negative impacts on job opportunities and child custody cases. He said he hopes his bill can at least gain some support, if it is not passed outright.

"The lobby for marijuana reform is getting larger and larger, particularly for Virginia families with members who have been impacted by our current marijuana penalties," Ebbin said.

We have other states that have decriminalized and the sky has not fallen," he said.  Public opinion polls show the majority of Virginians support decriminalizing the possession of small amounts of marijuana and making it punishable by fines rather than jail.

One city in Virginia has also given its seal of approval. The Norfolk City Council endorsed decriminalization in its 2019 legislative agenda.

The National Organization for the Reform of Marijuana Laws says 23 states have decriminalized or legalized marijuana, while 33 states have passed laws allowing medical cannabis programs.

In Virginia, five companies are expected to open the state's first medical cannabis dispensaries in 2019.

It is now 2019 and all responsible Virginian need to begin working now to (i) get progressive legislation passed during the coming legislative session, and (ii) send Republicans into a permanent minority status in both the Virginia Senate and the House of Delegates in November, 2019.
Posted by Michael-in-Norfolk at Tuesday, January 01, 2019