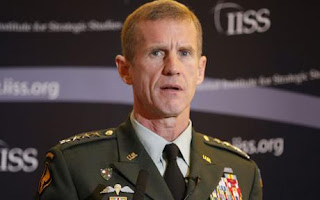 There are a multitude of things to dislike - perhaps dislike is to mild a term - about Donald Trump, but one thing that flows through all of them is his blatant dishonestly and immorality. Dishonesty and immorality permeate everything the man does with anywhere between 7 to 15 lies per day which makes one have to question those who continue to support him be they so-called old school Republicans who engage in the fantasy that the GOP is still the political party that it once was or the evangelical Christians who seek to police everyone else's sex life, don't drink alcohol, don't dance and/or put on falsely pious airs (modern day Pharisees, in short) who embrace a sexual predator and pathological liar. Decent people don't support individuals like Trump, nor as a retired Army general noted, should they work for them.  The Atlantic looks at the latest denunciation of Trump by a former senior military officer (note he also blast service members who engage in partisan politics while deployed on active duty).  Here are excerpts:

Stanley McChrystal has a history of speaking plainly about American presidents and their leadership. His military career ended in 2010 after a Rolling Stone profile quoted him and his aides as criticizing Obama-administration officials, mocking the civilian leaders and painting them as indecisive. McChrystal quickly offered his resignation, which President Barack Obama accepted.

But while the retired four-star Army general’s complaints about the Obama administration centered on its military strategy, his concerns about the current White House, which he articulated in an ABC News interview on Sunday, are rooted in President Donald Trump’s character.

McChrystal, whom Obama had selected to lead U.S. and NATO forces in Afghanistan, said in the interview that he would not work for Trump. “I think it’s important for me to work for people who I think are basically honest, who tell the truth as best they know it,” McChrystal explained.

“Do you think he’s a liar?” asked Martha Raddatz, the co-host of ABC’s This Week. McChrystal raised his eyebrows, shook his head, and responded, “I don’t think he tells the truth.” When Raddatz asked whether McChrystal considers the president “immoral,” the former general replied, “I think he is.”

In the interview, McChrystal told Raddatz he hopes Mattis’s exit has caused the American public to “take a pause.”

“If we have someone who is as selfless and committed as Jim Mattis resigning his position, walking away from all the responsibility he feels for every service member in our forces, and he does so in a public way like that, we ought to stop and say, ‘Okay, why did he do it?’” McChrystal said. “We ought to ask what kind of commander in chief he had that Jim Mattis, ‘the good Marine,’ felt he had to walk away.”

McChrystal also echoed recent criticism of Trump’s holiday visit to troops serving in Iraq. . . . . “When leaders visit soldiers … there’s a sacred interaction that occurs,” McChrystal said. “You don’t use that as a time to tout your politics or your personal opinions. You use that as a time to reassure them that what they’re doing is appreciated.” He also chided service members who brought Trump paraphernalia to the event—including “Make America Great Again” hats and a Trump 2020 patch—saying that they at least “violated the spirit” of military rules against political activity while serving on active duty.

McChrystal is not the only ex-military leader to recently rebuke Trump. William McRaven, the retired admiral who oversaw special operations—including the raid in which Osama bin Laden was killed—criticized the president for attacking the media and pulling the security clearance of a former CIA chief who spoke out against him.

Given how [Trump] the president loves to spar, it’s possible a volley is still on the way. He has fodder to dismiss McChrystal as just another spiteful Democrat: In the fateful profile that cut the general’s career short, Rolling Stone reported that he voted for Obama in 2008.

Every day that individuals continue to support Trump is an indictment of their morality and decency - something the rest of us need to remember in our daily interactions with them.
Posted by Michael-in-Norfolk at Monday, December 31, 2018