The Rats Abandoning the U.S.S. Trump Accept No Responsibility 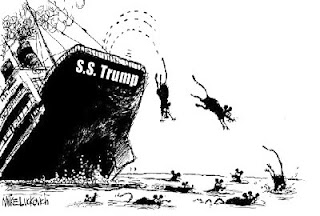 I have always believed that decent and moral people do not knowingly "get in bed" so to speak with immoral people.  Sooner or later the immorality begins to rub off on you and you become perhaps forever tainted by your decision to dismiss immorality, hate and bigotry.  This is a lesson one can witness watching the rats leaving the rudderless Trump/Pence regime who now plead that they should not be blamed for the misogyny that flows in torrents from the White House virtually daily.  A column in the Washington Post looks at the shameless hypocrisy of those resigning from or being forced out of Trump regime positions.  Do not cry for any of these individuals who knew up front that they were making a pact with evil. Here are column excerpts:

One by one they leap — or are pushed — from the foundering USS Trump, each offering a variation of the same plea: Don’t blame me.

Comes now retired Gen. John Kelly, the second of President Trump’s chiefs of staff to be discarded. Days before departing, he paused for a two-hour telephone interview with the Los Angeles Times. It was an extended exercise in self-absolution.

And don’t blame him for the travel ban or the family separation policies, either. Rather, he, argued, he should be judged for what Trump didn’t do: . . . . Right. And if we judge success by things that didn’t happen, we should also credit Kelly for avoiding a zombie apocalypse.

Kelly served his country honorably for decades. But there’s nothing courageous in announcing, on the way out the door, that he didn’t agree with many awful things Trump did on his watch. There was, once, a good argument that qualified people, by taking administration jobs, could temper Trump’s worst instincts. But it turned out Trump was not to be tempered.

Those who disagreed with the madness had an obligation to resign, or at least to speak out — not to wash their hands of responsibility after the fact.

Don’t blame Rex Tillerson. The ousted secretary of state recently told Bob Schieffer of CBS News he reined in Trump by saying “you can’t do it that way. It violates the law. It violates a treaty.”

Don’t blame Jim Mattis. The former defense secretary waited until resigning to publicly state his disagreements with Trump over NATO, “malign actors” such as Russia and “treating allies with respect.”

Don’t blame Reince Priebus. Trump’s first chief of staff spoke up about Trump’s chaos after he was ousted, telling author Chris Whipple: “Take everything you’ve heard and multiply it by 50.”

Also, don’t blame Omarosa Manigault Newman (she knew Trump was a racist but took a job in his White House anyway) or Michael Cohen (at his sentencing, the president’s former personal lawyer said his “blind loyalty” to Trump led him to “cover up his dirty deeds”) or Stephen K. Bannon (after he departed the White House, the former top strategist suggested Donald Trump Jr., Jared Kushner and Paul Manafort had engaged in “treasonous” and “unpatriotic” behavior) . . . .The self-absolution extends into the diaspora of Trump apologists. Departing House Speaker Paul D. Ryan (R-Wis.) gave a farewell speech denouncing the use of social media to “play on anger” and “on people’s fears.” Departing Sen. Orrin Hatch (R-Utah), a Trump cheerleader, gave a farewell speech lamenting the loss of “comity, compromise and mutual respect.” Rep. Mia Love (R-Utah), in defeat, denounced Trump for operating with “no real relationships, just convenient transactions.”

Better late than never? Perhaps. Those taking parting shots are certainly more honorable than those who, with non-disparagement agreements, get paid to defend Trump on the airwaves. The post-employment critics also compare favorably with Mick Mulvaney, who called Trump a “terrible human being” before becoming Trump’s budget director and now acting chief of staff.

But the after-the-fact criticism seems self-serving — a way for Trump enablers to rebuild their reputations and find new jobs. Tucker Carlson, an unstinting Trump booster, used the anonymity of a German-language weekly to put on the record that he questions Trump’s competence, knowledge, self-aggrandizement and personnel choices.

Even Carlson, though, is braver than the anonymous Trump official who wrote the New York Times op-ed about efforts to sabotage Trump from within. How long before the author emerges to claim credit — and perhaps a book contract? Proposed title: Don’t blame me.

Posted by Michael-in-Norfolk at Tuesday, January 01, 2019

As of about a minute ago, there were about 1,800 comments on Dana Milbank's column. For some reason, I suspect that most agreed.

As George Bernard Shaw is purported to have said, "You don't have to eat a whole egg to know that it is rotten." For the ethical, moral, and legal lapses of the Benedict Chump regime, it really should not have taken all that very long for people who entered his administration to realize that their hopes of being a potential force for good had become the actions of being an enabler and to have spat out further participation.

With best wishes to all of us, or most of us, for a better year than the one that has just ended.