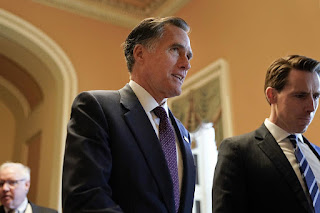 While it is far too late in the process and should have been even more searing - two and a half or three years ago would have been far better - in advance of his being sworn in as a member of the U.S. Senate Mitt Romney directed a broadside at Donald Trump's failures and tied them to Trump's amorality.  He did so in an op-ed in the Washington Post.  Here's a sampling:

It is well known that Donald Trump was not my choice for the Republican presidential nomination. After he became the nominee, I hoped his campaign would refrain from resentment and name-calling. It did not. When he won the election, I hoped he would rise to the occasion. . . . his conduct over the past two years, particularly his actions last month, is evidence that [Trump] the president has not risen to the mantle of the office.

To a great degree, a presidency shapes the public character of the nation. A president should unite us and inspire us to follow “our better angels.” A president should demonstrate the essential qualities of honesty and integrity, and elevate the national discourse with comity and mutual respect. . . . presidential leadership in qualities of character is indispensable. And it is in this province where the incumbent’s shortfall has been most glaring.

I will speak out against significant statements or actions that are divisive, racist, sexist, anti-immigrant, dishonest or destructive to democratic institutions.

Needless to say, the op-ed provoked a Hitleresque temper tantrum on the party of Der  Trumpenführer, who along with his boot-licking sycophants now see Romney as a potential rival for 2020.  Articles in The Daily Beast and Politico both look at the new dynamic and paranoia gripping the foul occupant of the White House.  First, this from The Daily Beast:

Mitt Romney isn’t even sworn in as a U.S. senator yet, and he’s already triggered the heck out of President Stompy-Foot, the Toddler in Chief. Within hours of Romney’s searing op-ed in The Washington Post, Trump’s itchy Twitter finger got the best of him . . . .

Trump has always reserved his most bitter ire, vicious personal attacks, and gratuitous smears for Republicans, particularly those who dare to question his execrable judgment, daily outrages against conservatism, or hand size. Just as Trump insults and belittles our allies while offering Vladimir Putin, Kim Jong Un, and the rest of the Lil Dictators Club things like foot massages and sweet love notes, he attacks Republicans with a spleen rarely displayed toward Democrats.

Romney’s editorial is in many ways a bookend to his 2016 speech condemning Trump. . . . . That call to arms went sadly unheeded, and every prediction he made concerning Trump’s disastrous reign of misrule is playing out.

The alleged party of fiscal discipline bought a couple of trillion in debt for a tax bill benefiting a handful of hedge funds, billionaires, and corporations. . . . . Trump has demonstrated his comfort with failure and bankruptcy over and over again as a master rooking the greater-fools in a long cycle of borrow-and-bust business flops. He assumes he’ll be out of office when the bills come due.

Romney, in his speech, also highlighted Trump’s “bullying, the greed, the showing off, the misogyny, the absurd third-grade theatrics,” all of which have become staples of a performative presidency that is always more about heat than light. Every one of Romney’s predictions and calls about Trump from 2016 rang true then, and are proven out today.

And here’s the thing: Most Republicans knew Romney was right then and they sure as hell know he’s right today . . . . . Mitt Romney, the Enemy of the State, is a role I imagine he never thought he’d play in American political life, but the impact of his words is causing a full-fledged meltdown in the Trump-supporting media apparatus on the right.

Behind Trump’s bluster and swagger, and the 10-toothed roar of his arena faithful, the GOP just had its collective head kicked in during the 2018 campaign. The loss of 40 House seats, the trade-war disaster, a volatile stock market, a teetering economy, the reality of Mueller’s growing case against the Maximum Leader, and Trump’s foreign-policy recklessness have left Republican elected officials disheartened and shell-shocked.

Mitt Romney’s editorial is making the rounds for speaking the words that much of the GOP lacks the courage to put their names behind.  Many of the voices rising to condemn him are secretly whispering, “Mitt, it was great. I agree with you, but I have to defend him, you know. I’ve got to worry about a primary…”

The piece in Politico offers this:

Republican National Committee Chairwoman Ronna McDaniel connected with President Donald Trump by phone on Tuesday evening with some alarming news: Mitt Romney, her uncle, was about to publish an op-ed savaging him.

The next morning, as Romney’s op-ed took hold of the news cycle, McDaniel, Trump’s handpicked party chairwoman, sent out an even more strongly worded tweet scolding her uncle

In the op-ed, Romney argues that Trump "has not risen to the mantle of the office," blew up a delicate détente between the two men. And it immediately fueled suspicions among [Trump's] the president’s top aides that the incoming senator is up to something — maybe even keeping the door open to a 2020 primary challenge.

At a time when talk of a 2020 GOP primary has simmered, Trump aides said Romney, on the eve of his swearing in to the Senate, was seeking to define himself as the new leader of the Never Trump movement. . . . . And former White House chief strategist Steve Bannon argued that Romney had launched a “direct challenge to Trump for leadership.”

He [Romney] was well aware that the op-ed would ignite a media firestorm and that it would be seen as a key moment in his early Senate career, something he would be asked about repeatedly in the halls of the Capitol.

But as the new year neared, Romney found himself increasingly frustrated with [Trump] the president, the person close to Romney said.

Trump aides worry that a primary challenge would become an unwelcome distraction for the president’s reelection campaign and potentially turn the 2020 GOP convention into a circus. They note that no Republican president has won reelection after a contested primary and point to George H.W. Bush’s bruising 1992 primary against Pat Buchanan as evidence of the damage an incumbent can suffer.

Let's hope that Trump has a primary challenge - assuming he isn't removed from office before then - and that the GOP convention is a circus of epic proportions.
Posted by Michael-in-Norfolk at Thursday, January 03, 2019

Mittens is playing a game of redemption. He was willing to kiss Cheeto’s ass to get a job.
Repugs are all the same.