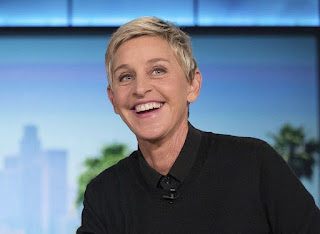 Perhaps I am more sensitive because I have had anti-gay expletives directed at me and been fired for being gay.  Or perhaps I reject absolution for insincere apologies/contrition - something the Catholic Church granted to countless predator priests.  The bottom line is, I do not believe Kevin Hart should be forgiven for his past anti-gay statements and I believe the only thing he is sorry about is that he lost the gig hosting the Oscars in February.  Thus, Ellen DeGeneres doesn't speak for me or, I suspect many others in the LGBT community when she granted Hart absolution.  Indeed, the blow back DeGeneres is receiving is well deserved.  No one anointed her to speak for the rest of us and, if Hart is invited back to host the Oscars, I may well choose to NOT watch the show. A piece in the Washington Post properly takes DeGeneres to task.  Here are excerpts:

Who died and made Ellen DeGeneres the gay pope?

In December, comedian Kevin Hart’s appointment to host the 2019 Academy Awards drew renewed attention to his hateful and damaging comments about gay people. The academy asked Hart to apologize: he refused and bowed out just days after the initial announcement. Many LGBTQ people cheered the withdrawal as the right move.

But now, in an interview that aired Friday on her daytime talk show, DeGeneres has absolved Hart of his ugly history. DeGeneres, who is gay, shared during the interview that she’d even interceded to ask the Oscars organizers to reconsider Hart as host.

Et tu, Ellen? As strange as this spectacle may seem, it’s actually in keeping with DeGeneres’s brand of nice. It’s a value she has sought to spread through the world, long signing off her show by telling her audience, “Be kind to one another.” Kindness means giving second chances, and giving second chances apparently means allowing Hart, who in 2011 tweeted that if his son played with a dollhouse he would “break it over his head & say n my voice ‘stop that’s gay,’ ” to host the most prestigious event in American cinema — one that’s also known as the Gay Super Bowl for its celebration of fashion and drama. On the set of DeGeneres’s show, anyone who thinks otherwise is simply a hater.

But that loud Internet crowd, which appears much larger than DeGeneres has allowed for, has it right. Niceness doesn’t require people to be pushovers. And kindness doesn’t mean forgiving people who’ve done bad things without being sure they understand what happened and are committed to making things right. DeGeneres’s unilateral dispensation to Hart on behalf of the LGBTQ community (and her kneecapping of Hart’s critics) truncates that process. That’s bad for all the LGBT people she claims to represent. And it’s bad for Hart, who gets to skip over the part of the process where he becomes a better, more empathetic person.

Hart made a halfhearted apology when he announced he was stepping down as host. But he hasn’t made any clear amends to LGBTQ people, and he certainly doesn’t seem to have atoned for his words. How can he, so long as he views the criticism of his past words as “slander on my name”?

More important, even if Hart had more fully repented, his sins are not DeGeneres’s to forgive.

Hart’s remarks were directed to queer people of color, who are generally much more vulnerable than their white counterparts. A 2017 poll from NPR, the Robert Wood Johnson Foundation and Harvard showed that LGBTQ people of color are twice as likely to have experienced discrimination in hiring and police interactions as white LGBTQ people, and that they are six times as likely to not call the police in a threatening situation so as to avoid reprisal.

Really, no single person is qualified to offer the forgiveness of all of queer America. But a white cisgender woman who is widely beloved and obscenely wealthy to boot is particularly ill-suited to try to muster such papal authority. For DeGeneres to think herself licensed to dispense this pass to Hart suggests that the only real indulgence here is her own.

Posted by Michael-in-Norfolk at Saturday, January 05, 2019