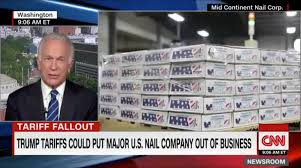 Midwest farmers are seeing an end of Chinese soybean purchases as China moves to Brazil as a new source of the commodity.  Automakers are decrying steel and aluminum tariffs that will increase auto prices by thousands of dollars and likely push auto manufacturers to look for savings through employee layoffs. And in numerous small towns important manufacturing concerns are facing economic turmoil and possible plant closings all so Der Trumpenführer can feel like a "tough guy" and stroke his sick ego.  A piece in The New Yorker looks at one small town in Arkansas - which voted heavily for Trump - which is now reaping the ill fruits of supporting an unfit malignant narcissist.  As noted before on this blog, while I worry about the children who will be adversely impacted, I hold no sympathy for the adults who voted for this malignant individual and now, in a form of divine justice, are being punished.  Here are article highlights:

In May, when President Trump announced new tariffs on steel and aluminum imported from Canada and Mexico, Chris Pratt, the plant manager at Mid-Continent Nail, the largest nail manufacturer in the U.S., was caught in a bind. Poplar Bluff, Missouri, Mid-Continent’s home, is a sprawling town of seventeen thousand on the eastern edge of the Ozarks, a two-and-a-half-hour drive south of St. Louis. It’s a quiet place and notably conservative. . . . . In 2016, nearly eighty per cent of the county went for Trump. “Did I like the slogan ‘Make America Great Again’?” Pratt said to me. “I sure did.”

And yet the President’s shoot-first, ask-questions-later economic policies have already cost the town hundreds of jobs. Since the tariffs were implemented, in June, the price of imported steel has risen by twenty-five per cent. Mid-Continent, which had to raise its prices on nails nearly as much, soon lost half of its orders and had to let go of almost half its workforce. If they don’t get any relief, Pratt has said, the factory will likely close.

Mid-Continent’s unexpected role in Trump’s trade wars highlights the tangled knots of the global economy. Before 2012, the firm was owned by two local brothers, who sold it to Deacero, a Mexican steel manufacturer (also owned by brothers), which now supplies Mid-Continent with the wire needed to make nails. When Pratt learned of the sale, he worried that the Mexican firm would close the Poplar Bluff factory and move the jobs there south of the border. But the new owners made a commitment to continue making nails in the U.S. In the next six years, the number of employees at Mid-Continent more than doubled, from two hundred and forty-seven to five hundred and seven. Last December, at the factory’s Christmas party, Pratt was feeling so optimistic about the future that he announced hopes to grow to a thousand employees.

Pratt’s effort to save his company—and the jobs of his employees, many of whom are friends—has prompted appearances on NPR, Fox News, and other media outlets. In July, he told a reporter for the Washington Post, “We’re in a situation where we’re fighting against our own country.” He has also met with members of Congress, U.S. senators, and even the Secretary of Commerce, Wilbur Ross.

Unfortunate, yes.  But these people who voted for Trump brought this economic disaster on themselves when they embraced Trump's racist and xenophobic agenda.
Posted by Michael-in-Norfolk at Sunday, December 30, 2018

Can you hear that? Is the music from the tiniest violin. It plays for them.