Why Is Trump Spouting Russian Propaganda? 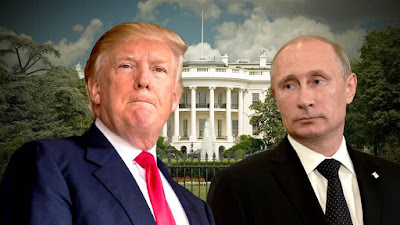 Anyone who isn't a dedicated Fox News or Breitbart follower knows that Donald Trump lies.  Indeed, most of what comes out of his mouth is untrue.  Yet something disturbing is now happening - and has been happening for a while now.  Trump is repeating Russian propaganda lies and stating falsehoods in the realm of foreign policy and history as true facts.  Disturbingly, one has to wonder where Trump is getting these falsehoods from since it certainly is not from U.S. foreign policy or national security advisers. If it's not from American advisers, where is it coming from?  One name seems to answer the question: Vladimir Putin. These lies are part of Putin's effort to rehabilitate myths about the former Soviet Union, a dictatorship/empire that Putin longs to restore, picturing himself, I suspect as Russia's new Tsar.  A piece in The Atlantic by a former Republican stalwart looks at this disturbing phenomenon and draws conclusions similar to my own.  Here are excerpts:


It was only one moment in a 90-minute stream of madness.

President Donald Trump convened a Cabinet meeting, at which he invited all its members to praise him for his stance on the border wall and the government shutdown.

There’s always a lively competition to see which member of the Cabinet can grovel most abjectly. The newcomer Matthew Whitaker may be only the acting attorney general, but despite—or perhaps because of—that tentative status, he delivered one of the strongest entries, saluting the president for sacrificing his Christmas and New Year’s holiday for the public good, and contrasting that to members of Congress who had left Washington during the Trump-created crisis.

But that was not the crazy part.

The crazy part came during the president’s monologue defending his decision to withdraw all 2,000 U.S. troops from Syria and 7,000 from Afghanistan, about half the force in that country.

“Russia used to be the Soviet Union,” he said.

To appreciate the shock value of Trump’s words, it’s necessary to dust off some Cold War history. Those of us who grew up in the last phases of the Cold War used to know it all by heart, but I admit I had to do a little Googling to refresh my faded memories.Through the 1970s, Afghanistan had been governed by a president who was friendly to the Soviet Union, but it was not reliably under Soviet control. That president, Mohammad Daoud Khan, became convinced that the local Communists were plotting against him. He struck first, assassinating one Communist leader in April 1978, and arresting others.

Instead of preventing the plot, this coup-from-above triggered it. In April 1978, the Communists—enabled by their strong presence in Afghanistan’s Soviet-trained military—seized power.

The new regime launched an ambitious modernizing agenda: women’s rights, land reform, secularization. That project went about as well as expected. While the Communists appealed to a small, educated elite in Kabul, they offended the ultraconservative countryside. Violent guerrilla resistance gathered. The guerrillas called themselves “mujahideen,” holy warriors. The Kabul government dismissed them as “bandit elements” and “terrorists.”

By the end of 1979, the Kabul-based Communist government was teetering, nearing collapse. The Soviet authorities in Moscow blamed the incompetence, corruption, and internecine violence of their local allies. In December 1979, they overthrew and killed the then-Communist leader, installed somebody more compliant, and deployed 85,000 troops to enforce their rule over the countryside. The Soviets had expected a brief, decisive intervention like those in Prague in 1968 or Budapest in 1956. Instead, the war turned into a grinding Vietnam-in-reverse. The Soviets withdrew, defeated, in 1989.

Here’s why Trump’s lopsided view of this story is so telling. Inflicting that defeat on the U.S.S.R. was a major bipartisan [American] foreign-policy priority of the 1980s. The policy was designed by Jimmy Carter’s national-security adviser, Zbigniew Brzezinski, and executed by the Reagan administration.

It’s amazing enough that any U.S. president would retrospectively endorse the Soviet invasion. What’s even more amazing is that he would do so using the very same falsehoods originally invoked by the Soviets themselves: “terrorists” and “bandit elements.”

It has been an important ideological project of the Putin regime to rehabilitate and justify the Soviet invasion and occupation of Afghanistan. Putin does not care so much about Afghanistan, but he cares a lot about the image of the U.S.S.R. In 2005, Putin described the collapse of the Soviet Union as (depending on your preferred translation) “the greatest geopolitical tragedy of the 20th century” or “a major geopolitical disaster of the 20th century”—but clearly a thing very much to be regretted.

The war in Afghanistan helped bring about that collapse, not because it bankrupted the Soviet regime—that was an effect of the break in the price of oil after 1985—but because it forced a reckoning between the Soviet regime and Soviet society. As casualties mounted, as soldiers returned home addicted to heroin, Soviet citizens began demanding the right to speak the truth, not only about the war in Afghanistan, but about all Soviet reality.As of mid-morning on January 3, the day after the president’s repetition of Soviet-Putinist propaganda in the Cabinet room, there has been no attempt by the White House to tidy things up: no presidential tweet, no corrective statement. The president’s usual defenders—Sean Hannity, Fox & Friends, the anti-anti-Trump Twitter chorus—have likewise ignored the whole matter. . . . There’s apparently nothing they can think of to say in exoneration or excuse.

Putin-style glorification of the Soviet regime is entering the mind of the president, inspiring his words and—who knows—perhaps shaping his actions. How that propaganda is reaching him—by which channels, via which persons—seems an important if not urgent question. But maybe what happened yesterday does not raise questions. Maybe it inadvertently reveals answers.