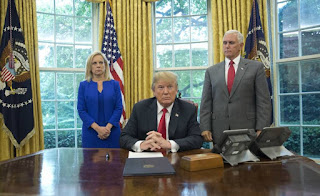 As the previous post noted, evil persists (i) when leaders and their supporters lack empathy for other humans regardless of their race or creed, (ii) a majority of the population is willing to rely on the so-called Nuremberg defense to shirk responsibility for their own actions or more on point, their failure to act.  The reversal of Der Trumpenführer's family separation policy demonstrates that while Trump, Pence, Sessions, Kirstjen Nielsen, Congressional Republicans, some 55% of Republicans, and many "Christian family values" groups have reached a moral depravity akin to that of Hitler's Germany, the majority of Americans - at least so far - have not thrown morality and decency aside.  The key going forward will to keep the majority united in opposing the evil that is Trump and Trumpism and in keeping a spotlight on the moral bankruptcy of Trump supporters who embraced the moral evil of the family separation policy.  A piece in New York Magazine looks at why Trump was forced to back down - for now, at least.  Here are article highlights:

[A] top aide to President Trump told Axios that he “doesn’t want to look weak” by abandoning his policy of family separation. Trump “feels boxed in, is frustrated and knows it’s bad politics — but also understands it’s not a fight he can back down from.”

But back down he did. In the face of overwhelming public pressure, Trump relented and agreed the policy his administration had deliberately engineered was a real policy, and that he could change it, and would.

Even a casual understanding of human psychology or American history would have made it patently obvious that the cruel method of terrorizing migrant families by wresting children from parents was bound to provoke a profound backlash. The prospect of losing a child is the most elemental fear any parent can imagine.

The willingness of Trump and his administration to plunge ahead anyway with a barbaric tactic is primarily a reflection of their moral emptiness. Homeland Security Secretary Kirstjen Nielsen reportedly opposed it in private, yet energetically obfuscated on its behalf in public. Why didn’t she resign in protest? Why hasn’t anybody?

The reversal also demonstrates the comprehensive failure of Trump’s immigration agenda. Trump is facing the inevitable dilemma of a populist leader: He was elected promising easy solutions, and is discovering none exist.

Trump’s internal assessment is, if anything, even more grim. “Over the past few months, Trump has called Nielsen and [Attorney General Jeff] Sessions to account as the number of immigrants flooding across the southern border has spiked. Arrests on the border nearly tripled year-over-year, rising to 40,344 this past May from 14,519 in May 2017,” reports Politico.

He subjected Nielsen to a tirade six weeks ago that lasted an incredible 30 minutes, and concerned the comprehensive failure of their efforts to control the border. Trump settled on family separation after every other method at his disposal collapsed. On the central policy promise he made, Trump is a flop, and he knows it.

The collapse revealed one more important thing: The power of mass revulsion. There are limits, after all, to what Trump can do without risking his patina of legitimacy as head of state. Outraged voters flooded Congress with calls, as they did to oppose the Republican plan to repeal Obamacare, and with the same success. Intense voter opposition matters.

It also matters when Laura Bush speaks out against him, and when Steve Schmidt resigns from the Republican party, and when American Airlines declares it won’t cooperate with the administration. It is a sign that the peripheral elements of Trump’s coalition have a breaking point, that while they can tolerate a great deal of sub-rosa venality, visceral outrages can create a dangerous reaction.

The damage of Trump’s horrific policy cannot be fully undone. But, in the face of his every instinct, Trump was forced to retreat. He didn’t want to look weak, but he does, because he is.


The resistance to Trump and Trumpism needs to continue and, if anything, intensify.  Giving Democrats control of the House of Representatives is the only guaranteed way to prevent future moral horros from being committed by a man who lacks any morals or decency.
Posted by Michael-in-Norfolk at Thursday, June 21, 2018