Older LGBT Americans Must Be the Role Models We Lacked 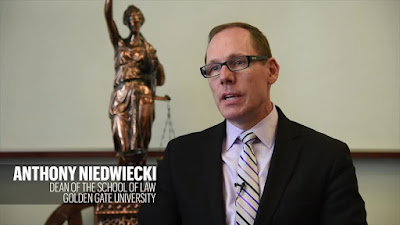 Growing up in Upstate New York in the 1960's there were no "out" LGBT role models.  Indeed, in those pre-Internet days, I thought I was the lone closeted gay kid in my high school.  As it turns out, I wasn't - some of us have connected years latter via Facebook - but the isolation and effort to hide my "secret" from family, friends and the world in general was oppressive.  Throw in my Catholic upbringing and it was down right soul killing.  Little did I know at the time that there were numerous successful closeted LGBT individuals that ranged from movie stars to leaders of industry.  Things are improving now, but depending on where one lives or the profession one has chosen, role models can remain few and far between.  Anthony Niedwiecki, dean of Golden Gate Law School and the husband of a blogger friend - his husband and I both attended a LGBT blogger summit in Washington, D.C. almost a decade ago - has a timely column in The Advocate that encourages older LGBT individuals to rise to the occasion of being role models for younger generations.  A key part is not just mentoring, but being visible - "out" if you will - in one's personal and professional life.  Here are highlights:

I was recently asked by a student, “How do you think being gay has impacted your career?” It was a great question that got me thinking about my journey from coming out in law school to becoming one of the only openly LGBTQ deans to ever lead a law school in the nation.

I came out at a time when there weren’t many visible LGBTQ leaders to look up to. Coming from a Catholic family in Michigan, I just didn’t have access to many people like me to look up to. That was also true as I entered law school. I purposely chose a school where I thought I could be more myself and finally come out. Luckily, I found friends and a few faculty members who helped me grow comfortable enough to take those first steps out of the closet. Finding the people who had the strength to be visible and proud helped me on my own journey.

But being gay in a predominantly straight male profession has its challenges. The first internship I had at a law firm was incredibly hostile to LGBTQ people. One of the partners eventually pulled me aside and told me, “You should probably start bringing a girlfriend to company parties — people are starting to talk.”  I left that firm.

I instantly became much more aware of the level of acceptance at my next internship or job. After graduation, I ended up at a wonderful law firm that had an openly gay partner. Having an LGBTQ person in leadership completely shifted the tone of the firm and made me completely comfortable to be myself. The partner even began mentoring me to help me succeed, which helped me see the value of being out in the professional world. If he could succeed, so could I.

The impact of visibility was driven home when I ran for local office. I decided to run for city commissioner after the mayor went on an antigay tirade. If I wanted to change the tone that he was setting, I needed to be the example of what LGBTQ leadership could look like. During my run to be city commissioner, I never shied away from being out. In fact, I went to California to marry my husband during the campaign. We won — and it changed the tone and trajectory that the bigoted former mayor tried to set.

All of these experiences are why I'm so proud to be incredibly outspoken and open as the dean of Golden Gate University. I remember the impact that having an openly LGBTQ person in my profession made on me and want to pass that along. But we still have so far to go. Many times, we run into the “rainbow ceiling,” where systemic biases impact the ability to move into a leadership role in our professional lives. A new report indicates we are routinely “frozen out of” top management jobs. This is even truer when it intersects with the biases against women and communities of color.

Things are slowly changing. We see groundbreaking members of our community like Sen. Tammy Baldwin, Laverne Cox, and Adam Rippon unabashedly being their authentic selves. The impact of visible leaders and high-profile figures is hopefully being felt by the current generation of LGBTQ youth coming into their own.I want to one day lose track because we’re so well represented. I want to see us on the Supreme Court or as president. And I truly believe those leaders of tomorrow are out there, drawing strength from those who have come before. Just like I did.


Kudos to Anthony - and his husband who has been an amazing activist for LGBT rights in his own right.
Posted by Michael-in-Norfolk at Friday, June 22, 2018

Email ThisBlogThis!Share to TwitterShare to FacebookShare to Pinterest
Labels: blogger summit, changing hearts and minds, coming out, gay role models, growing up in the closet, legal profession, living out and proud