Why Classical Liberals Are Making a Comeback 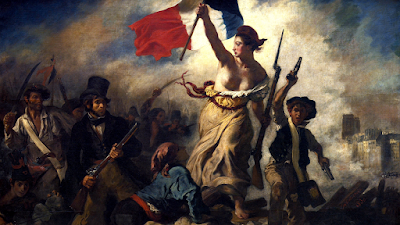 With the rise of Donald Trump and Trumpism - a mix of racism, religious extremism, and anti-free trade sentiments - and the hijacking of the Republican Party by what Hillary Clinton correctly described as "deplorables," many conservatives have found themselves politically and intellectually homeless.  To remain in the GOP requires one embrace a KKK mentality and seek a lobotomy. As a result, thinking conservatives are seeking a new intellectual home.  As a piece in Politico notes, some are embracing "classical liberalism" as a new home.  While "liberal" compared to Trumpism, classical liberalism differs from the "liberals" attacked by the knuckle draggers of the Trump base.  Here are highlights from Politico on the phenomenon:

The “classical liberal” label has until now mostly been the domain of libertarian types and conservatives on the never-Trump end of the spectrum, such as Bill Kristol and much of the National Review staff, who are eager to root themselves in a tradition that connects the Founding Fathers to conservative philosophical icon Edmund Burke. Its recent surge in popularity, however, has come from twin phenomena—those conservatives’ intensifying desire to distance themselves from a Trump-ified Republican Party, and the term’s discovery by that new clique of anti-PC voices placing themselves in opposition to the supposedly illiberal campus left.

To those not immersed in the wonky lexicon of the intellectual right, it may have sounded like a contradiction at best, heresy at worst. Don’t “liberals” drive hybrid cars, listen to Ed Sheeran, and nosh on organic arugula and locally sourced tofu?

The tradition of the use of the term “classical liberal” within conservative circles dates back to (and is largely because of) the movement’s youth. The movement conservatism that still flickers at the heart of the Trump-era Republican Party was born just within the last 70 years, roughly, whereas the tradition of liberalism as understood by most of the world outside America, and as embraced by these conservatives—unfettered free markets, the rule of law, civil liberties (with qualifications, frequently)—is defined by the work of 17th and 18th century heavyweights such as Thomas Hobbes and Adam Smith.


Adam Smith published “The Wealth of Nations” in 1776, a portentous year in more ways than the obvious. The Scot’s book, which formed the basis of the free-market capitalist system as we understand it today, also featured the most prominent use to its date of the newly coined modifier “liberal.” “Liberal” policies, in Smith’s conception and that of his contemporaneous predecessors, stemmed from the Enlightenment concept of “liberty”—"Every man, as long as he does not violate the laws of justice, is left perfectly free to pursue his own interest his own way,” as he wrote in “The Wealth of Nations.”The idea caught on. The debate, however, over to whom that liberty is extended or denied, and under what circumstances, was no less robust at the idea’s inception than it is today.They embrace the label, then, as a sort of “gotcha” to their critics, emblematic proof that they are the true defenders of intellectual freedom. It also serves as a useful differential from the popular conception of conservatism—while right-leaning in many ways, these newcomers to classical liberalism’s big tent are ill at ease with a movement that ostensibly includes the Mike Pences and Mike Huckabees of the world.[A] classical liberal can, or should, be spendthrift, hawkish on the social safety net, and willing to defend to the death the right to voice an unpopular opinion, whether they agree with it or not. . . . “The point of liberty, however, is not to offend the sensibilities of majorities, but to defend the right of people to live as they choose so long as they do not infringe on the equal rights of others. Classical liberals believe in liberty for all, not just for themselves.”“I’m hopeful that… if people want to call themselves classical liberals, and actually subscribe to real classical liberal ideological views, I hope they win the fight the way the neocons did, and pull the Republican Party back toward its modern tradition of limited government, free market, free speech,” Goldberg said. “If I had to pick a team, I would pick that team.” . . . In an era where those still faithful to old-fashioned, Goldwater-style movement conservatism have been relegated to the sidelines by Trump’s cannibalization of their party, that team may someday be their only option.


Personally, I deem the Republican Party past saving.  But perhaps a new party can emerge from its ashes.
Posted by Michael-in-Norfolk at Monday, June 18, 2018

Email ThisBlogThis!Share to TwitterShare to FacebookShare to Pinterest
Labels: betrayal of conservatism, decline of the GOP, deplorables, future of the GOP, liberty for all, neverTrump, resistance, Trumpism