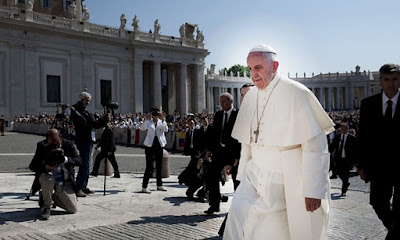 Since his rise to the throne of St. Peter I have founding it beyond annoying to see Catholic gays who cannot let go of their internalized homophobia and walk away from Catholicism gush and swoon over Pope Francis.  Indeed, these individuals cling to unofficial comments made by Francis to try to convince themselves that Francis might be less extreme than his two predecessors.  In the process, of course, they strive to ignore the reality that Francis has done NOTHING to change official Catholic Church dogma that condemns every LGBT individual.  Now, perhaps statements made by Pope Francis at an event for Catholic families in Italy will wake these individuals and Francis apologists to the reality that the Church is incapable of change - at least absent massive defections of members and plummeting parishioner collection revenues.  What did Francis say?  That same sex headed families  - and by extension, their children - deserve no recognition.  Only heterosexual headed families and their children merit recognition and support.  Metro Weekly looks at Francis' revelation of his true deep seated animus towards LGBT individuals and their families. Here are excerpts:

Pope Francis has condemned same-sex families, saying they do not deserve to be recognized in the Catholic Church.

Francis made the comments at an event for Catholic families in Italy, saying that opposite-sex parent families are the only partnerships that should be recognized by the church.

“It is painful to say this today: People speak of varied families, of various kinds of family [but] the family [as] man and woman in the image of God is the only one,” he said, according to ANSA News Agency, who published the remarks on Saturday.

Francis apparently also said that abortion should be considered the modern-day Holocaust.  “In the last century, the entire world was scandalized by what the Nazis did to ensure the purity of the race,” he said. “Today we do the same, but with white gloves.”

The Pope even praised spouses who stay with partners that are unfaithful, saying that it’s more holy to wait for them to stop cheating rather than seek a divorce. “Many women — but even men sometimes do it — wait in silence, looking the other way, waiting for their husband to become faithful again,” he said, adding that it was “the sanctity that forgives all out of love.”

[L]ast month, the Pope warned Italian Bishops to monitor for any gay applicants trying to join the priesthood and to not allow them into the church.

And in 2015, he said that conservative Christians should be allowed to refuse to issue same-sex marriage licenses if doing so violates their personal religious beliefs. That same year, he said that the institution of marriage was threatened by redefining sexuality.

Remember this: Francis could change this within a matter of minutes if he chose to issue a reversal of the Church's poisonous doctrine while speaking "ex cathedra."  He chooses not to and, thus, if one is gay and unfortunate enough to have been born into a Catholic family, there truly is only one solution: walk away and convince as many family members and friends as possible to walk away with you.