How to Respond to Those Supporting Trump's Cruelty to Children 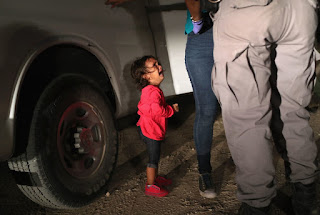 Like many I suspect, I continue to struggle to get my head around the mindset of Trump/Pence supporters who see nothing wrong with the forced family separation policy currently in effect along America's southwest border.  A policy that is based on a lie by Trump and which treats brown skinned children in some regards as little better than animals and certainly displays a sinister effort to dehumanize them and undocumented immigrants in general.  Beyond this, there is the issue of how does one try to have discourse with individuals who seemingly are incapable of seeing common humanity in others.  One of my cousins, Jess Charles, from the far north of New York State wrote a Facebook post that to me is remarkable in how it addresses these issues.  Here it is in its entirety:

I try really hard to be open-minded and tolerant of views that are different from mine, but I cannot stay silent on this immigration issue any longer. I am saddened, angered and shocked at the ignorance and lack of compassion so many of my acquaintances have recently shown. Since I don’t have endless hours to debate this topic, I’m going to try to summarize my thoughts in this post. Let me preface it by saying: if you don’t like what I have to say, you have a few options: scroll on, unfollow me or unfriend me. I don’t need comments negating or debating me.

First. For those saying that if you are a legal US resident and commit a crime, you’ll be separated from your children and immigrants are no different, I say this. In the majority of the US citizen cases, children are kept with their families, and if they aren’t, generally CPS keeps the family informed of where their children are. Most/generally, not always. And up until the current administration, immigrant families were NOT separated.

Second. Committing a crime (let’s say possession of heroin with intent to use) is mighty different than fleeing a country because you are in ABSOLUTE fear for your safety and the safety of your family. Some crimes are committed out of necessity, I understand that, and again, GENERALLY, the system will try to work with people (like petty larceny for diapers, again doing what you need to do for your family). I ask so many of you who sit in the comfort of your own home what you would do if your neighborhoods became drug dens, filled with slaughter and you were too afraid to walk out the door or even go to sleep. What would you do to escape that? I know I would do anything to protect my son.

Third. Unless you are 100% Native American, who are YOU to turn your back on someone from another country?! Almost every single person I know, with very few exceptions, is a descendant of someone who immigrated here. Imagine if your great-great grandparents had come over on a boat, their families ripped apart the moment they stepped foot on the soil, and then they were just shipped back?

Fourth. I suggest you study the origins of The Holocaust. Many of us learned of it in junior high or early high school and seem to forget the basis of how it came to be. Once you visit a Nazi concentration camp, you will be forever changed. Study that period of time, and the ignorance and indifference that people displayed. Then take a look around and ask what is so different today from that time period.

Fifth. Let’s take a look at the Declaration of Independence. Direct excerpt: “We hold these truths to be self-evident, that all men are created equal, that they are endowed by their Creator with certain unalienable Rights, that among these are Life, Liberty and the pursuit of Happiness.” Or how about this one: “He has endeavoured to prevent the population of these States; for that purpose obstructing the Laws for Naturalization of Foreigners; refusing to pass others to encourage their migrations hither, and raising the conditions of new Appropriations of Lands.” Let that sink in for a moment.

I honestly could go on, but chances are if you are reading this, you are someone like-minded who I have already had conversations with, or someone who wholly disagrees with me and is already fuming and not willing to discuss things rationally. So again, I will say, if you don’t like what I have to say: scroll on, unfollow me or unfriend me.

Sprinkle kindness everywhere, people, and don’t limit it to only those who are US citizens. Pray for those less fortunate, fleeing from terrors we are lucky enough to never know. Donate your time, energy, patience, whatever you can to make the WORLD a better place, not just your backyard.