The Parallels With the Nazi Regime Continue 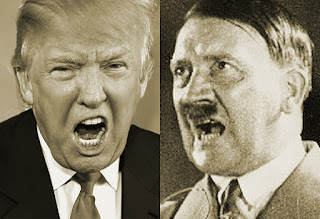 One of the things that students of the Nazi regime in Hitler's Germany often find it difficult to comprehend how ordinary Germans allowed the Holocaust and mass murder of millions to occur.  Three factors were key.  The first, a deranged and hate-filled leader who viewed others as less than human.  Hitler clearly viewed Jews, gypsies and gays as less than human and, therefore, they could be exterminated. Hitler's anti-Semiticism knew no limits.  Fast forward to today, and Donald Trump's racism knows no limits.  A piece in Talking Points Memo looks at the level of Trump's contempt for non-white immigrants:

[Trump's] use of the word “infest” to talk about people is literally out of the Nazi/anti-Semites’ playbook for talking about the Jewish threat. It was also a standard for talking about Chinese in the western United States and it remains part of the vocabulary for talking about Romani (Gypsies) in parts of Europe. This is the most hard-boiled kind of racist demagogic language, the kind that in other parts of the world has often preceded and signaled the onset of exterminationist violence. The verb “to infest” is one generally used to describe insects or vermin (rats), creatures which are literally exterminated when they become present in a house or building or neighborhood.

The second was the so-called “Nuremberg defense” popular with Nazis on trial for crimes against humanity after Germany's defeat in WWII.  As the Intellectualist notes, the acting head of ICE is already invoking this defense, underscoring his own personal moral bankruptcy:

Thomas Homan, the acting director of Immigration and Customs Enforcement said Monday that comparing ICE agents to Nazis is unfair, because “they’re simply enforcing laws enacted by Congress”.  Thomas Homan employed the “Nuremberg defense” – used by German Nazi officials in an attempt to escape accountability with the claim they were merely following orders.

The third component is the portion of the population that is either equally racist and morally deficient as their "führer" or to lazy and indifferent to take a stand in opposition to evil.  The "it doesn't involve me" excuse is little better than the Nuremberg defense. It too is an excuse for moral bankruptcy and complicity in evil.

For those who say the evils of Nazi Germany could never happen in America, they need to open their eyes.  We have begun traveling down a similar path.  Will everyday Americans prove they are no better than 1930's Germans?