Kaine Calls Out Stewart's Praise and Encouragement of White Supremacists 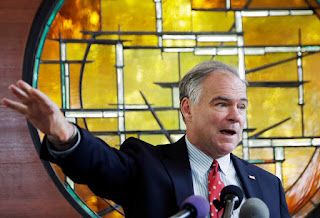 Republicans faced a moment of truth in 2016 as to whether or not the party retained any shred of morality when they nominated Donald Trump as their presidential candidate.  Some 70,000 voters spread across three states failed the test of morality when they gave Trump an Electoral College victory - sadly, the Electors failed the test of morality when they rejected their constitutional duty to protect the nation from an unfit demagogue.  Now, in 2018, Virginia faces a test of the morality in the U.S. Senate contest between Democrat Tim Kaine and Republican extremist and white supremacist Corey Stewart. Stewart embodies everything morally deficient in today's Republican Party as he bases his campaign on racial hatred and pandering to religious extremists who make the biblical Pharisees look to be the height of moral decency.  Over the weekend, Tim Kaine blasted Stewart for the ugliness that under-girds his campaign and his connections to racists and anti-Semites.  Here are highlights from the Washington Post:

Sen. Tim Kaine (D-Va.) attacked Republican challenger Corey A. Stewart for his ties to white supremacists in a speech to more than 1,000 cheering Democrats on Saturday, unloading on the brash defender of Confederate symbols who won the GOP nomination last week.

“My opponent likes to praise and encourage white supremacists, those who organize hate-filled rallies like the tragedy in Charlottesville and perpetrate online filth and anti-Semitism,” Kaine said. “This week the American press was filled with stories about his bizarre connections to spreaders of hate. And Israeli newspapers were filled with articles about his ties to notorious anti-Semites. Is this who Virginia is in 2018? Is this what the Senate needs?”

Stewart, chairman of the Prince William Board of County Supervisors since 2006, leads Virginia’s second-largest jurisdiction with a swaggering style that he touts as “more Trump than Trump.” His efforts to crack down on undocumented immigrants in the county stretch back more than a decade.He [Stewrt] embraced the Confederate flag and monuments in a bid for governor last year, a strategy that startled many establishment Republicans but nearly propelled him to victory in a primary battle with former Republican National Committee chairman Ed Gillespie. Gillespie, who went on to ape some of Stewart’s hard-edge messaging, lost in a landslide to Democrat Ralph Northam in November.

During the gubernatorial primary race, Stewart twice appeared with Jason Kessler, founder of Unity and Security for America (USA), a fledgling group that calls for “defending Western Civilization.” Kessler went on to organize the Unite the Right rally, which sparked deadly unrest in Charlottesville last summer.

In his speech Saturday, Kaine also took aim at the Trump administration for separating hundreds of migrant children from their parents on the nation’s southern border — a practice that Kaine suggested was rooted in racism. . . . . “On the night before Father’s Day, that’s what this nation has come to with this president. . . . Is there any doubt that if these children had light skin and were speaking English that they wouldn’t be loaded into cells and rooms in a windowless Walmart in the hundreds and the thousands on the southern border of this country?”

Kaine laid out what he called his “positive vision” for the country, including “health care for all,” affordable college and criminal justice reform. He eventually pivoted to a full-throated condemnation of Stewart, starting with the county board chairman’s record on taxes, education, climate change and abortion.

[E]ven the Koch brothers — refused to support him,” Kaine said, referring to the founders of Americans for Prosperity, a conservative group that has announced that it will not back Stewart.