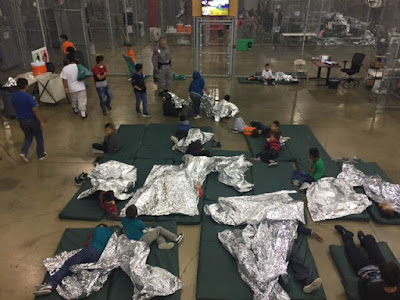 The Globe and Mail is Canada's most widely read newspaper and it is now carrying editorials that condemn the horrors being done to undocumented immigrant families by the Trump/Pence regime which is lying desperately to blame the policy on Democrats even though the policy originated with Trump, Pence and the always evil Jeff Sessions.  Similar anti-American, anti-Trump sentiments are being published by legitimate news outlets around the civilized world. While many Americans (I would hope a majority) are horrified by the Trump/Pence policy, the Trump base is applauding the horrors.  Trump supporter Tony Perkins - a man with documented white supremacist ties and currently the president of Family Research Council, a certified hate group - is but one example of Trump's racist cheerleaders.  As noted in previous posts, silence and inaction is not an option if one wants to avoid complicity in deliberate cruelty.  Some like former First Lady Laura Bush spoke out in an op-ed in the Washington Post condemning the Trump/Pence regime cruelty.  Here are some excerpts:

I live in a border state. I appreciate the need to enforce and protect our international boundaries, but this zero-tolerance policy is cruel. It is immoral. And it breaks my heart.

Our government should not be in the business of warehousing children in converted box stores or making plans to place them in tent cities in the desert outside of El Paso. These images are eerily reminiscent of the internment camps for U.S. citizens and noncitizens of Japanese descent during World War II, now considered to have been one of the most shameful episodes in U.S. history. We also know that this treatment inflicts trauma; . . . . it is our obligation to reunite these detained children with their parents — and to stop separating parents and children in the first place.

Imagine how America's image in the world is being devastated.  I dread the questions the husband and I will face when traveling in France and the United Kingdom in the fall.   A piece in the Globe and Mail gives us an idea of what other civilized nations are hearing and thinking.  Here are highlights:


Under the direction of Donald Trump and Attorney-General Jeff Sessions, the U.S. government has snatched roughly 2,000 children of asylum seekers from their parents – including an infant girl who was taken from her wailing mother while breastfeeding – and put them in detention camps. They are there for the crime of existing, as migrant children fleeing foreign violence and oppression, in Mr. Trump’s United States.

We’re told by Mr. Trump’s backers to feel good about the conditions of the camp – to cheer that migrants have TV and snacks and video games instead of mothers or fathers or siblings.

The older children scream for their parents, while the babies simply scream. The littlest ones cannot even tell us who they are. They don’t yet have words. And so we try, in the United States, to find the words for them. To find the words to describe this level of evil, which was both preventable and proclaimed.

This is the platform Mr. Trump ran on, after all: a platform of xenophobia and corruption. This is the culmination of the dictatorial ambitions and dehumanization of immigrants that smug journalists and officials told people to take seriously – but not literally. For Latino immigrants, demonized from the very day Mr. Trump launched his campaign, it was always literally.

The last 17 months have been a test of how far the administration could push the boundaries of morality and law before an atrocity was mainstreamed. . . . The sickness is not just caused by Mr. Trump; it also stems from a collective failure of the most powerful, whether elected or not, to call a lie a lie, to label abuse as abuse. Those tasked to check atrocities instead chose to enable them.

“This is not America,” Republican politicians like to say about the imprisoned children, “this is not who we are.” These statements ignore U.S. history – this was the United States for Indigenous children torn from their parents and sent to boarding schools, for African children sold into slavery, for Japanese families held in internment camps. One answer to “it can’t happen here” is “it already happened here” – children have been imprisoned in the United States, albeit selectively, through autocratic policies imposed over centuries by powerful white men upon the non-white and vulnerable.

Another answer to “it can’t happen here” is, of course, “make it stop happening” – an option the GOP can choose to enact, by holding Mr. Trump and officials, who have flagrantly broken the law, accountable for their crimes and striking down their policies. They refuse to do so.

In 2003, journalist Anna Politkovskaya described the horrors of Vladimir Putin’s rapidly changing Russia, its toxic mix of brutality and lies. . . . . A hit was ordered on Ms. Politkovskaya and she was killed in 2006 for speaking out. Her words stopped but the sentiment lingers.

Today, we live under an aspiring autocrat who locks up babies who literally cannot speak for themselves. We are confronted with an assault against children so horrifying it is hard to find the words to describe it. But whatever our feelings, they are nothing compared to what migrant children and parents must be going through. Use your words and fight – for families to be reunited, for their rights and for their freedom, for this nation’s blighted soul.

America - if it ever had one given some of its horrific history - is losing its soul.  While Trump and his white supremacist/Christofascist base revel in the cruelty being unleashed, the rest of us must demand these evils cease.  We also need to get out and vote en mass come November and vote Republicans at EVERY level out.  Let's change Congress so that it can stop and/or remove Trump.  Better yet, send Trump to prison (and not a VIP one) for the rest of is life.
Posted by Michael-in-Norfolk at Monday, June 18, 2018