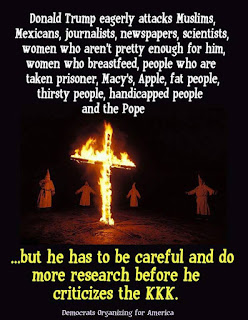 The exodus of sane, rational - and I would argue, decent and moral - people from the Republican Party is accelerating as the party base becomes more racist and religiously extreme.  While Donald Trump (with Mike Pence quietly cheering in the background) intensifies his calls to racial hatred and ramps up his pandering to Christofascists, moderates are fleeing the party in droves. The fear - or perhaps psychosis that is fueling the GOP's lurch further and further toward something akin to a mix of fascism and fear mongering straight out of the KKK playbook is described in one column in the New York Times as "white extinction anxiety."  Sadly, the term aptly describes I suspect the bulk of Trump's supporters - including some of our "friends" who, in my view, threw aside morality and voted for the man - who simply cannot see the common humanity in others if they do not have the same skin color (or same sexual orientation).  Personally, as someone living in a white minority city, I simply do not comprehend the fear.  The only thing that springs to mind is what my former New Orleans belle grand mother: some whites simply must have others to look down on and discriminate against to feel good about themselves.  Superior if you will.  My grandmother held such whites in the lowest regard imaginable - white trash was the term she used.  Some may be offended, but the term increasingly describes the GOP base that now revolves around evangelical extremists and white supremacist.  Here are column highlights:

Strip all the other rationales away from this  draconian immigration policy [Trump's family separation policy]. This is at the core: White extinction anxiety, white displacement anxiety, white minority anxiety. This is the fear and anxiety Trump is playing to. Politico Magazine dubbed Trump “Pat Buchanan With Better Timing.”

[T]he new numbers show that for the first time there are more children who are minorities than who are white, at every age from zero to nine. This means we are on the cusp of seeing the first minority white generation, born in 2007 and later, which perhaps we can dub Generation ‘Z-Plus.’”

America will soon be a majority-minority country. White America is growing older, there are fewer white women of childbearing age, and the white fertility rate is lower than that of Hispanics and blacks.

All manner of current policy grows out of this panic over loss of privilege and power: immigration policy, voter suppression, Trump economic isolationist impulses, his contempt for people from Haiti and Africa, the Muslim ban, his rage over Black Lives Matter and social justice protests. Everything.

Trump is president and is beloved by his base in part because he is unapologetically defending whiteness from anything that threatens it, or at least that’s the image he wants to project. It is no more complicated than that. These immigrant children crying out for their mothers and fathers are collateral damage, pawns in a political battle to wring strict legislation out of Congress — medieval torture displays meant to serve as deterrents. These immigration policies are for people who conflated America with whiteness, and therefore a loss of white primacy becomes a loss of American identity.


But as noted above, for every new deplorable that Trump recruits to the GOP, more are leaving.  If the racism doesn't drive them away, the conflating of GOP policy with right wing Christian extremism does so.  Of course, it's no coincidence that many - likely a majority - the leaders of the "Christian" "family values" groups rallying to Trump are also all about white extinction anxiety also embrace white supremacy.  A second column in the New York Times looks at the exodus this entwining of the Christofascists' agenda is engendering.  Here are highlights:

When the obituary for the Republican Party is written, the year 1980 will be cited as the beginning of the end. Reaganism was in full flower, but the big tent was already folding. Republican leaders endorsed a constitutional ban on abortion at the convention that summer, ending the party’s historic commitment to women’s rights and personal freedom.

As pro-choice Republicans, we refuse to support a party that has rightly earned the labels anti-woman and anti-common sense. . . .  As Republicans, we spent four decades working inside the party to produce effective policies helping women and families. Despite growing malice from an anti-choice faction, we kept our disagreements within the family. We redoubled our efforts to find common ground, rather than simply walk away.

But these successes were dismissed by party leaders who became increasingly beholden to the social extremists who were winning primaries in our broken, gerrymandered electoral system.

Our argument was simple: True fiscal conservatives should embrace family planning because it reduces poverty, increases educational attainment and work force competitiveness, improves health and provides people the opportunity to make educated moral choices. We incorrectly assumed that our fellow fiscal conservatives would join us in applauding the reduction in the number of unintended pregnancies, which saved taxpayers billions of dollars spent on the welfare state.

Instead, the policies and programs that led to these outcomes came under constant fire. The far right was more interested in conflating abortion and birth control for political purposes. It is fiscally disingenuous to deny birth control coverage and then bemoan unintended pregnancies and abortion.

The nastiness escalated to personal attacks on men and women who had dedicated countless hours and dollars to the party.

We don’t have the space to outline President Trump’s transgressions, but it is important to understand that his rise is an inevitable result of the hostility to women within the Republican culture. Women’s reproductive freedom has shifted with the wind: Remember that Ronald Reagan once supported abortion rights, as did George H. W. Bush, Mitt Romney and Mr. Trump himself.

We can no longer support a Republican Party that is shutting down low-cost health care clinics offering cancer screenings, basic health services and much-needed family planning services. It has become a party that wants to punish pregnant women by limiting their economic choices, that wants to reduce access to sex education programs that prevent unintended pregnancy and disease.

It is no wonder that women are voting with their feet. According to a recent analysis by the Pew Research Center, 56 percent of women identify as or lean toward Democrats. The gap is even wider among college graduates and minority voters.

It has become taboo within the party to even say “pro-choice.” Most of our supporters gave up on the party as it moved to the extremes not just on abortion but also on other social and fiscal issues.

This Republican Party is no family of ours. And so we say goodbye.