Is America on a Slippery Slope to Fascism? 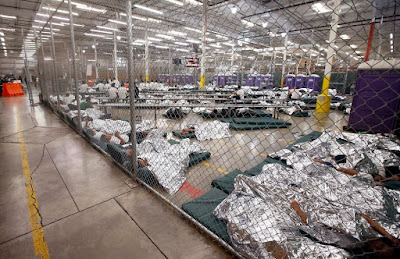 As a history junkie (I majored in history in college), two of the periods of the past that I find most fascinating are the rise of Hitler in Germany and the rise of the Bolsheviks in Russia and the fall of the Romanov dynasty.   While Hitler represented fascism and Lenin represented a perverted version of communism, both movements saw morality and some level of decency towards others turned upside down and targeted elements of society rendered less than human through propaganda that paved the way for their extermination.  In the process, Germany went from being one of the world's most educated and civilized nations to one where mass murder and genocide reigned.  Russia, while nowhere near as industrialized, saw the educated classes murdered and many others murdered on a grand scale.  In both countries, ultimately millions died even as a cult of the glorious leader flourished.  Fast forward to America in 2018 and we see the occupant of the White House - I refer to him as Der Trumpenführer since his view of himself seemingly parallels that of Hitler - who disseminate lies daily and who is trumpeting propaganda that dehumanizes others and targets the free press.  Things that occurred in both Germany and Bolshevik Russia.

In 2008, I attended the LGBT Blogger Summit in Washington, D.C, along with 49 other bloggers and LGBT journalists from across the country (Microsoft and Progressive Insurance under wrote the entire cost).  One of my compatriots at the weekend long event was Karen Ocamb who now writes for the Los Angeles Blade.  While no "chicken little" by any means, Karen shares my concerns for where America is headed.  Neither Hitler nor Lenin became supreme autocrats overnight.  They were aided by a large segment of the population that was indifferent to what was happening, and also by a smaller but more determined segment that applauded their policies of hate, bigotry and resentment.  Karen has a column that calls on all of us to wake up and be aware of what is happening and the need to resist it will all our might.  Here are highlights:

[J]ournalist Masha Gessen, an expert on Russian President Vladimir Putin and authoritarianism, pulled no rhetorical punches. “I don’t think we have fascist rule in this country, but what we have is a fascist leader,” Gessen told MSNBC’s Joy Reid on June 23, referring to President Donald Trump. “We have a nativist, nationalist leader who is devoting all his energy into portraying a group of people as a super dangerous enemy, both sort of subhuman animals, right, ‘infestation,’ and superhuman at the same time because they’re so frightening— because if we don’t protect ourselves, terrible things will happen, we don’t know what kind of catastrophe will befall us,” encapsulating Trump’s use of fear tactics and dehumanizing language about immigrants to rile his base. “That is fascism,” Gessen said. “Whether we allow fascism to take over this entire country is an open question and none of us knows what’s going to happen. But it is by no means hyperbole to call Trump a fascist.”Gessen noted how slowly fascism takes hold. “Somebody posted recently the mock cover that The Boston Globe did before Trump’s election to try to scare people that said, ‘Deportations to Begin.’ And we thought it would be so shocking just a year and a half ago—and now we’re in the middle of it,” she said. “Deportations have long since begun and worse than deportations.”
“And soon internment camps,” Reid added as an almost throwaway afterthought. And then came the internment camps—for children.[O]n April 6, 2018, Attorney General Jeffrey Beauregard Sessions announced a new “zero-tolerance” policy. Lest anyone miss the point, Sessions went to Friendship Park on the border on May 8 and gleefully spelled out the new policy.   . . . . The felony criminalization of immigration forced authorities to take a child while the parent was referred for prosecution, which often resulted in deportation without the child. Sessions later declared that asylum would not be granted to anyone fleeing from domestic violence or gangs.

The policy was the last straw for former Republican strategist Steve Schmidt who renounced his membership in the Republican Party, now “fully the party of Trump.”
“This child separation policy is connected to the worst abuses of humanity in our history. It is connected by the same evil that separated families during slavery and dislocated tribes and broke up Native American families,” he said in the thread. “Today the GOP has become a danger to our democracy and values.”Schmidt also came close to calling Trump a fascist. “Conservatism has become synonymous with obedience to the leader – a leader who says ‘I am the law. I am above the law. I will define what truth is.’ Truth is what the leader says it is, not what we would have recognized months ago as objective truth,” Schmidt told MSNBC. “The last time this happened, it unleashed a tragedy the likes of which the world has never seen. And I think there is a real lack of imagination in this country about how fragile these institutions are and how dangerous a president as unprepared, as authoritarian, as ignorant as he is—the damage he would be able to cause.”The government tried to control the detention narrative. But reporting by Los Angeles native Jacob Soboroff for MSNBC after touring a facility in McAllen, Texas burst through. He described essentially a prison with “babies sitting by themselves in a cage with other babies.” He said reporters on the tour were asked to smile at the kids because they “feel like animals locked up in cages.” ProPublica released smuggled audio of young children crying for their parents. Reports of “tender-age shelters” and the sight of young people escorted in the dark of night to facilities around the country caused outrage.[W]hile a San Diego judge ordered family reunification within 30 days of separation, the government has apparently not been keeping track of the children, including infants and toddlers who do not know their names. More than 2,300 children are in government custody since the separation policy started in April.“[History] is repeating itself but it has gone to a new low with Donald Trump. When we were incarcerated [in Japanese-American internment camps], our families were intact. My parents were with me,” out actor George Takai told CNN. “But in this case, it’s come to a chilling low where babies are torn away from their mothers and placed in separate internment camps.”Takai says Trump’s lies and inflammatory rhetoric are similar to what happened to Japanese-Americans in the 1940s. “We were characterized by the government, classified as ‘enemy aliens.’ We were neither,” he said, noting that many young Japanese Americans “rushed to their recruitments centers to volunteer to serve in the US military” right after Pearl Harbor but were denied.But repeat a lie often enough “and it becomes a reality.” That’s what happened with “enemy aliens,” Takai said, recalling comments from the politically ambitious California Attorney General Earl Warren: “We have no reports of sabotage or spying or fifth column activities by Japanese Americans. And that is ominous because the Japanese are inscrutable. We can’t tell what they’re thinking so it would be prudent to lock them up before they do anything.”LGBT people should be concerned about Trump’s call to do away with immigration judges. “What are we going to do for LGBT people who are fleeing regimes that actually torture and kill them for being gay?,” asks Takano. “They don’t even get a hearing?” This anti-immigrant attitude harms us morally, to have this be done in our names as American citizens.”


Shockingly, the referenced San Diego federal judge noted that the Trump regime seemingly had no method to keep track of children so as to reunite them with their parents.  Imagine if your children or grand children were seized by force and there was a serious likelihood you would never see them again.   Having brown skin does not make one less than human.  My fear is that the targets today are Hispanic immigrants, but tomorrow it may be gays, blacks, or others.   There are few people more consumed with hate than Trump's Christofascist/white supremacist base.
Posted by Michael-in-Norfolk at Friday, June 29, 2018