Searching for Hope in Frightening Times 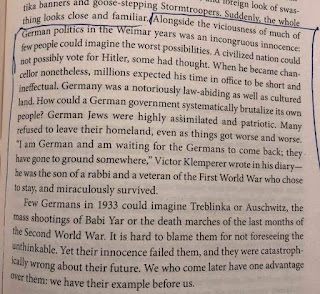 The last few days have been enough to make a thinking person feel depressed as the U.S. Supreme Court has issued horrific rulings, followed by the announcement of the retirement of Justice Kennedy which could make such horrors the norm for future Court rulings for years. Public reaction falls into four categories: (i) jubilant Christofascists and white supremacists who foresee a Court that will further their anti-democratic agenda, (ii) Democrats and progressives feeling literally physically ill at the prospect of the far right's agenda moving forward, (iii) those realizing the extreme danger ahead looking for what to do to try to stop, and (iv) the indifferent soccer moms and those who were too lazy to get themselves to the polls and vote in November 2016 who are as clueless as many Germans were in the 1930's (hence why I re-posted the image above from Facebook).  A column in the New York Times lays out what in categories (ii) and (iii) need to do immediately to try to turn around a frightening future.  Here are column excerpts:


In fact there are three things they [Democrats and progressives] need to do.

First of all, they need simply to reflect on their recent history and understand why they’re in this situation. The time to play hardball was 2016. Maybe there’s nothing they could have done, given that the Republicans ran the Senate. But consider this counterfactual.

I argued at the time that President Obama should have nominated not Judge Garland but Mariano-Florentino Cuéllar, then 43 years old and an associate justice on the California Supreme Court. Justice Cuéllar would have been an aggressively political choice in exactly the way Judge Garland was not. As a young, impeccably credentialed Mexican-American — by far the largest of the Latino voting blocs — Justice Cuéllar would have been someone to whom the Democrats’ core constituencies would have developed an emotional attachment. Someone they’d fight for. . . . . [McConnell] wouldn’t have given Justice Cuéllar a vote either. But in that case, the refusal would have carried a higher political price. It would have energized the Latino vote. It would have made the Supreme Court a more central voting issue to Democratic constituencies than poor Judge Garland ever became.

That it never became that central issue is not all Mr. Obama’s fault. Hillary Clinton’s campaign shares the blame for that, and in fact the Democratic Party generally. I kept waiting in the fall of 2016 for Mrs. Clinton and all of her surrogates to emphasize to liberal voters: Don’t you see, this is our chance! They’ve had the Supreme Court for 30 years. We win, it’s ours! Voting rights, abortion rights, contraception, L.G.B.T. rights, union rights, money in politics, Second Amendment interpretations — if we get this one vote, all of those and more will change in our direction!

The argument never really came. On the other side, it was a key argument, and quite possibly the key argument. All of those “Christian” conservatives knew very well they were voting for a man who was about as Christian as Larry Flynt. But they voted for Donald Trump en masse. . . . Democratic politicians and their voters did not.

So that’s the first thing Democrats must do — learn from the past. We might not be in this situation if they’d played for keeps in 2016.

The second thing the Democrats have to do is fight this nomination to the bitter end. Maintain, even if it’s manufactured, some aura of optimism and eagerness for the battle. Mr. Schumer said all the right things Wednesday afternoon, but if you watch the video, you’ll see he wasn’t exactly breathing fire.

A sports team that’s behind and sees it’s likely to lose can give up midway through the fourth quarter or it can fight until the final second. Doing the former is always remembered as shameful, the latter always as noble. Besides, it’s not the fourth quarter. It isn’t even the end of the first quarter.

President Trump could name someone so extreme that he or she will instantly be controversial. Democratic and progressive groups will have ample opportunity to pressure the four or five Republican senators who might become no votes.

And don’t forget Robert Mueller, the special counsel, or think he isn’t relevant here. If he issues a report in July or August, as many now expect, and if that report presents evidence that Mr. Trump did indeed obstruct justice, Mr. Schumer and the Democrats can make a strong case that a president governing under such a cloud — who might yet be found to have colluded with Russia in his election — has no business making Supreme Court nominations. That nominee, if confirmed, may well be ruling on matters relating to the investigation of the president. No, it’s not clear that will work as a gambit. But if the situation were reversed, the Republicans would try it.

Yes, chances are the Democrats will lose this one, which brings us to the third thing they must do. They need to get their core constituencies to understand the stakes and to vote with the Supreme Court, and really all federal judges, at top of mind.

[H]ere we are, contemplating the end of Roe v. Wade, the reversal of the Obergefell v. Hodges same-sex marriage decision and God knows what new levels of darkness on money in politics, gun rights and even age-old precedents like one person, one vote. If you don’t know much about that, go read about Reynolds v. Sims; a very conservative court could put that precedent at risk, and it would be a nearly incalculable disaster for democracy.

And the sad truth is that apparently it will take these developments, or some of them, for liberals to see why they should care about the Supreme Court. Or let’s hope it will just take the threat of them happening. If Democrats and liberals want to choose a date to begin caring again, Nov. 6, 2018, would be a good day to start.

Part of caring will be finding a message that will get those in category (iv) above to get off their asses and begin caring about their larger community and the nation.  Indifference and laziness at some point become complicity in evil.  These people need to be convinced that they must act to oppose it at the ballot box.
Posted by Michael-in-Norfolk at Friday, June 29, 2018