Abortion and LGBT Rights Are Next the Trump/Christofascist Hit List 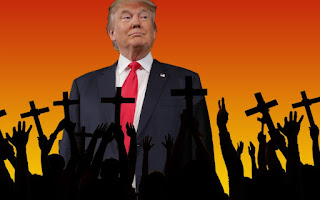 Like many in the LGBT community, I felt physically ill when I heard the news that Justice Anthony Kennedy would be retiring from the U.S. Supreme Court at the end of the current term.  His retirement means that Der Trumpenführer, whose approval ratings remain in the toilet outside of Christofascist and white supremacist circles, will nominate another ideologue like Neil Gorsuch who will purse the Trump base's dream of outlawing all abortions, rescinding LGBT rights, and disenfranchising as many minority voters as possible.  Short of a miracle where moderate Republicans - if such a thing still exists - in the U.S. Senate buck Trump and their party and reject Trump's nominee, for at least a generation, the U.S. Supreme Court will be openly hostile to minority rights of all kinds. How bad will it be?  Likely, very bad and if "friends" who voted for Trump think I will forgive them, they are delusional.  They have stabbed so many of us in the back and deserve nothing but derision and ostracizing from the company of decent, moral people.  A piece in The Daily Beast, looks at the coming nightmare.  Here are highlights:

The judicial apocalypse is here, and there’s nothing Democrats can do to stop it.  Justice Anthony Kennedy, the swing voter in most of the Supreme Court’s close cases of the last decade, is retiring at age 81. President Donald Trump will choose his successor.

With the Senate filibuster of Supreme Court nominees eliminated last year by Republican Senate Leader Mitch McConnell, anyone Trump nominates will be rubber-stamped.  That has been the pattern so far, with 39 judges confirmed so far, often in an expedited process, with not a single Republican vote opposing any of them.

Moreover, Trump’s judicial nominees thus far have been chosen by the far-right Federalist Society, which has put forward extreme ideologues in the mode of Justice Clarence Thomas, whose ideas were once considered on the fringe but are now increasingly within the [GOP] mainstream.

While Justice Neil Gorsuch replaced another conservative, the late Justice Antonin Scalia, whoever replaces Justice Kennedy will likely be a conservative firebrand replacing a moderate.  The shift will transform the Court for decades to come.

Among the Court’s precedents that will be on the chopping block are Roe v. Wade, protecting women’s rights to choose to have an abortion, and Obergefell v. Hodges, protecting gay people’s rights to marry.

Roe has been significantly limited in recent years, and all four sitting conservative justices have either opposed it directly, or opposed the doctrines on which it is based.

Justice Kennedy wrote the Obergefell decision, over a vigorous dissent by Chief Justice John Roberts, and the vote was 5-4.  Even the Court’s own doctrines of respecting precedent will not protect same-sex marriage; just this week, the Court directly overturned a precedent regarding public-section unions.

In the case of abortion rights, Justice Kennedy was the swing vote striking down Texas’s junk-science regulations that would have shuttered most abortion clinics in the state; with him gone, other states will surely pass and litigate their own versions.  Iowa’s new law, known as the heartbeat bill, bans abortions once a heartbeat is detected, usually the sixth week of pregnancy – the lawsuit about that law will provide the next Supreme Court with an opportunity to further limit Roe, or overturn it entirely.

Likewise for marriage rights. There are already cases pending about whether same-sex spouses are entitled to spousal benefits, and numerous cases about when private actors may discriminate against gay people.  Each of these provide opportunities to limit or overturn Obergefell.

Assuming the Senate fast-tracks the nomination – as McConnell and Trump have already said will happen – the confirmation vote will take place before the November elections.

Democrats’ only hope is to somehow persuade moderate Republicans like Jeff Flake or Susan Collins to oppose Trump’s nominee, although they have been mostly unable to do in the first two years of the Trump presidency.  (Senator Flake recently said he would block Trump’s nominees if the Senate did not act to restrain Trump on tariffs.)

Understandably, the consequences for the Supreme Court, and civil rights as we know them today, are eclipsing, . . . Justice Kennedy turned out to be the unlikely hero of the LGBT equality movement, writing every major pro-LGBT opinion in the Supreme Court’s history, culminating in Obergefell in 2015.

n an ideal world, a responsible Republican president would nominate a thoughtful moderate-conservative who is respected by his colleagues and who lies within the judicial mainstream – basically, a conservative version of Merrick Garland.

But in the world we live in, Trump is likely to please his base by nominating an extreme conservative, like his recent picks who have compared abortion to slavery, called Justice Kennedy a “judicial prostitute,” and called transgender children “evidence of Satan’s plan at work.”  All of those nominees, by the way, were confirmed without a single Republican vote against.


I am not many years from retirement and, if my fears are realized, the husband and I may find ourselves looking to retire somewhere outside of the United States.
Posted by Michael-in-Norfolk at Thursday, June 28, 2018