An Explosion is Coming 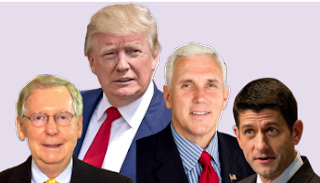 Throughout history the arrogant rule of a minority has usually ended badly for those thwarting the will of the people.  The French and Russian Revolutions are but two of the more extreme examples as is the fate of  Romania's Nicolae Ceausescu and his wife.  Here in America, one can hope that such violent eruptions never occur, but we are seeing a phenomenon where an increasing arrogant and out of touch Republican Party - thanks in part to gerrymandering and an Electoral College that has failed the intent of the Founding Fathers - is forcing an agenda on the country that is opposed by the majority of Americans. As a piece in New York Magazine notes:

Democrats have won the national vote in six of the last seven presidential elections, which, with the retirement of Anthony Kennedy, will have resulted in the appointment of eight of the Supreme Court’s nine justices. And yet four of those justices will have been appointed by presidents who took office despite having fewer votes than their opponent.

Over the last generation, the Republican Party has moved rapidly rightward, while the center of public opinion has not. It is almost impossible to find a substantive basis in public opinion for Republican government. On health care, taxes, immigration, guns, the GOP has left America behind in its race to the far right.

Thus, the question becomes one of when will the majority say "enough" and fight back?  One would hope that the taking back of the nation from minority control would take place at the ballot box, but given the GOP's gerrymandering of districts and a constitution that grants 2 U.S. Senators to states with tiny populations populations  - Wyoming has a population of less than 600,000 while the cities of Hampton Roads have a population of 1.7 million; Montana has slightly over 1 million residents while New York City has over 8.5 million - electoral efforts for the majority to retake control my be difficult.  Has Mitch McConnell, who represents a state with a population of half of New York City and not vastly larger than that of Los Angeles, and Trump forgotten Ceausescu's fate (I suspect Trump has no idea who Ceausescu was although I suspect Melania does)?   A column in the Washington Post looks at what will hopefully be the coming explosion.  Here are highlights:

Eight years ago, when Congress was about to pass Obamacare, John A.Boehner, leader of a powerless Republican congressional minority, gave a passionate, prescient speech on the House floor. . . . “This is the People’s House, . . . .  you can only ignore the will of the people for so long and get away with it.”

This was Boehner’s famous “hell no, you can’t” speech. But the Democrats could. They had the votes, and they passed Obamacare. Boehner was correct in his prediction, though. The Democrats were soon on their way to minority status in the House and would later lose the Senate and the presidency.

Now . . . . We see Majority Leader Mitch McConnell (R-Ky.) vowing to ram through the Senate the confirmation of the decisive fifth hard-right justice on the Supreme Court, quite likely signaling the end of legal abortion in much of the United States and possibly same-sex marriage and other rights Americans embrace, in far greater number, than they ever did Obamacare.

One wants to cry out: Hell no, you can’t! But Republicans can. They have the votes. Democrats can and should fight, but the GOP controls the schedule, sets the rules and already eliminated the procedures that gave the minority a say in Supreme Court confirmations.

If anything, the fury should be far more intense on the Democratic side right now than it was for Boehner in 2010. The Affordable Care Act was the signature proposal of a president elected with a large popular mandate, it had the support of a plurality of the public, and it was passed by a party that had large majorities in both chambers of Congress and had attempted to solicit the participation of the minority.

Now we have a Supreme Court nomination — the second in as many years — from an unpopular president who lost the popular vote by 2.8 million. The nominee will be forced through by also-unpopular Senate Republicans, who, like House Republicans, did not win a majority of the vote in 2016.

For good measure, the new justice may well join the other four conservative justices in revoking same-sex marriage, which also has the support of two-thirds of Americans. And this comes after the Republicans essentially stole a Supreme Court seat by refusing to consider President Barack Obama’s nominee, Merrick Garland.

You can only ignore the will of the people for so long and get away with it.Republicans have been defying gravity for some time. . . . they lost the popular vote in six of the last seven presidential elections.

Because of partisan gerrymandering and other factors, Democrats could win by eight percentage points and still not gain control of the House, one study found. And the two-senators-per-state system (which awards people in Republican Wyoming 70 times more voting power than people in Democratic California) gives a big advantage to rural, Republican states.

The Supreme Court’s conservative majority has protected Republican minority rule. It gave the wealthy freedom to spend unlimited dark money on elections, while crippling the finances of unions. It sustained gerrymandering and voter-suppression laws that reduce participation of minority voters. And, of course, it gave the presidency to George W. Bush.

The backlash is coming. It is the deserved consequence of minority-rule government protecting the rich over everybody else, corporations over workers, whites over nonwhites and despots over democracies. It will explode, God willing, at the ballot box and not in the streets. You can only ignore the will of the people for so long and get away with it.

Sadly, part of me believes that ultimately, it will explode in the streets. If that happens, McConnell, Trump and others will deserve whatever very harsh consequences befall them.
Posted by Michael-in-Norfolk at Saturday, June 30, 2018