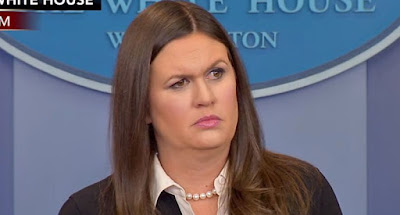 One thing about the Christofascists and evangelical Christians is that they can dish out bigotry and discrimination toward others yet they typically take great offense if they receive treatment like what they give to others.  Indeed, they act as if they are being persecuted.  They believe that public accommodation laws are a one way street that apply to everyone but themselves. Cite real or feigned religious belief and voila, one is exempt from the law.  Last week, Sarah Huckabee Sanders, White House press secretary and daughter of homophobe extraordinaire Mike Huckabee deliciously found herself on the receiving end of what she believes is fine for gays: a restaurant, Red Hen, in Lexington, Virginia, refused to serve her and she was forced to leave.  Make no mistake, Sanders is a liar - she lies daily during press briefings - and a hypocrite.  A piece in Vox looks at Sanders receiving what she advocates is fine for others.  Here are excerpts:

I feel for Sarah Huckabee Sanders. I’d be miffed, too, if I sat down with a group of friends to a spread of cheeses at a charming farm-to-table restaurant only to be asked to leave by the owner.

I happen to believe that food establishments should offer their goods to anyone willing to pay for them. Sanders does not. She thinks it’s OK, for example, for a business to hang a sign in their window saying they won’t serve gay couples. This is why, on one level, her very public dig at the owner of the Red Hen, which set off a torrent of hate tweets and threats her way, is ridiculous. It’s hypocrisy.

On another level, restaurant-gate is an example of the Trump administration’s unique commitment to courting divisiveness. Donald Trump doesn’t even pretend to speak to or for all Americans. Rhetorically, there hasn’t been a more disrespectful administration in 150 years. But when Sanders wants dinner, the White House is all for mutual respect. Either way, the base laps it up.

This disregard for all kinds of people has had real consequences in their lives including for gays, transgender people, migrant children, victims of domestic violence or police brutality — and the list goes on. When Sanders, or any Trump official, tweets indignantly about a slight, it’s just added insult.

The irony of restaurant-gate is that Sanders supports the owner of Masterpiece Cakeshop, Jack Phillips, who refused to bake a wedding cake for a same-sex couple in Colorado. The owner of the Red Hen, Stephanie Wilkinson, told the Washington Post one reason she asked Sanders to leave was because of Sanders’ stances on gay rights. The staff includes several gay workers. The staff was also deeply upset about Sanders’ defense of Trump’s family separation policy, she said.

“I would have done the same thing again,” Wilkinson told the Post. “We just felt there are moments in time when people need to live their convictions. This appeared to be one.”


When the high court heard oral arguments in December, Sanders went as far as to say it would be fine for a business to hang up a sign announcing it denies services to gay people.

Sanders sees a constitutional right under the First Amendment to chose who to serve and not serve in a business. But on Friday, she made no mention of this context. She made no attempt to distinguish the two. Instead, she took an opportunity to fan divisions between the White House’s base and everyone else.

Sanders has backed Trump through all of this, defending his comments, his counter-attacks and his policies. Maybe she was disappointed about dinner on Friday. Maybe she really did feel wronged. But her decision to take to Twitter and spark a divisive feud between Trump supporters and liberals feels familiar. It’s almost like she wants to have her cake and eat it, too.


I view most evangelical Christians and the Christofascists as far worse than the Pharisees so frequently condemned in the New Testament. If they want to refuse to serve gays for being sinners, the rest of us should be able to treat them the same way. They are an abomination and cancer on America.
Posted by Michael-in-Norfolk at Sunday, June 24, 2018