The Future of Gay Rights Is Extremely Fragile 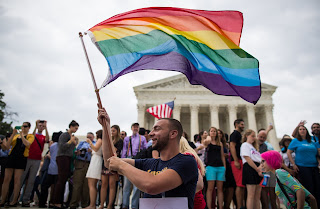 June is Pride month across America and in many other parts of the globe.  It is a time to reflect on and celebrate lesbian, gay, bisexual, and transgender history - which has so often been hidden from view by the dominant straight, white society, if not openly oppressed. Given the current political climate under the Trump/Pence regime which seeks to grant extraordinary rights to Christian extremists, Pride month and Pride events remain important, perhaps as important as every.   Here in Virginia, LGBT citizens continue to lack any state law employment non-discrimination and public accommodation protections thanks to Republicans in the General Assembly. The recent ruling by the U.S. Supreme Court in the Masterpiece Cakeshop case which allowed a “Christian” baker to cite alleged religious belief as a basis to refuse service to a same sex couple planning their wedding is being construed by many on the far right as a license to discriminate against LGBT citizens (and even non-white citizens).  Sadly, things are likely to get far worse if Der Trumpenführer and the GOP controlled U.S. Senate place a right wing ideologue on the Supreme Court to replace retiring Justice Kennedy who increasingly seems to have bought by Trump (see this Vanity Fair piece).  A piece in the New York Times by two law professors looks at the distressing days ahead.  Here are excerpts:

In 30 years on the Supreme Court — the past 13 as the swing justice — Justice Anthony Kennedy has been the decisive vote in cases on issues ranging from abortion to affirmative action. Yet his legacy will be defined primarily by his opinions in the area of gay rights, where he wrote the major majority opinions expansively reading the Constitution to protect gay Americans.

His gay-rights decisions will now face a hostile majority on the court, which is likely to overturn, cut back or nullify at least some of them. And he has made it surprisingly easy.

Justice Kennedy’s gay-rights legacy, however, is at risk and not just because of the slim vote margins that produced it. Unfortunately that margin is almost certainly gone already.

When President Trump’s second nominee takes his seat at the court, probably this fall, a majority of the court is likely to disagree with Justice Kennedy’s expansions of L.G.B.T. rights. And even without overturning his signature cases, Justice Kennedy’s decisions can be narrowed and their implications minimized.

And those who will want to cabin his legacy will be aided by the justice’s own decision-making style. His opinions often hedged, refusing to establish strong rules to protect gays and lesbians going forward.

Most important, he balked at declaring that laws discriminating on the basis of sexual orientation should be, like those discriminating on the basis of race or gender, presumed suspect by the courts. Much of constitutional law depends on the “levels of scrutiny.” If a law burdens a fundamental right or discriminates on the basis of race or sex, courts take a hard look to make sure the government has a really good reason for the law.In the marriage cases, a fair analysis should have depended less on “the universal fear” of loneliness and more on whether the bans were subject to rational-basis review or something stricter. If rational, the bans should survive. If strict, they would fail. Both sides petitioned the court to rule on that question, but Justice Kennedy could not bring himself to decide it.

These doctrinal points Justice Kennedy neglected are not mere niceties. Lower courts need such guidance to determine whether laws biased against L.G.B.T. people should be upheld. Indeed, lower courts have previously read Justice Kennedy’s opaque language in Lawrence to allow states to ban gay adoption and permit governments to fire employees for engaging in private, consensual sexual behavior. The language in the marriage cases could allow similar mistakes.

If Justice Gorsuch’s narrow view of Obergefell prevails, gays and lesbians may one day enjoy a right to marry without marriage equality.

Justice Kennedy left unanswered one of the pivotal questions for the future of gay rights: Do businesses have a right to discriminate against gay and lesbian employees or customers if the business owners claim a religious objection? The issue was teed up perfectly this term, but Justice Kennedy ultimately punted, leaving the key questions once again unaddressed. With his resignation he ensured they would be answered by a future, more conservative court more likely to see anti-gay discrimination as perfectly rational.

Back in 2010, after the Supreme Court’s decision in Citizens United overturned one of former Justice Sandra Day O’Connor’s campaign finance opinions, she lamented her retirement, saying, “Gosh, I step away for a couple of years and there’s no telling what’s going to happen.”

It may be Justice Kennedy — and those Americans who’ve found protections and respect in his decisions — with similar regrets in the years to come.

I'd be lying if I didn't admit that I am very fearful for the future.