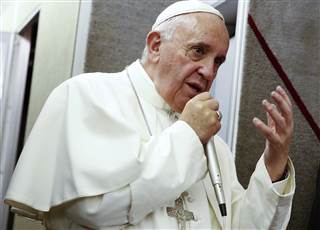 As regular readers know, I was raised Roman Catholic, served as an altar boy for roughly a decade and rose to the level of a 4th Degree Knight of Columbus.  All of that preceded my "coming out" but more importantly, the sex abuse scandal that has continued to shock decent moral people around the world since it first exploded on Boston.  Since then, no part of the world has been exempt from stories of years of abuse and many decades of deliberate cover ups by bishops, cardinals and, yes, popes. Unlike countless altar boys globally, I was never sexually molested back in the days when women only entered a parish sacristy to collect soiled altar linens or to return fresh ones. I understand how easy it was for predator priests to groom and select their victims.  What I do not understand is the refusal of the Church from the current Pope on down to punish those who aided and abetted predators.  No bishop or cardinal has been punished and when Cardinal Law who became the face of cardinals who were derelict in their duties to protect children and youths died at the Vatican during the past month, Pope Francis attended his funeral. Why?  Was he blind to the message that his presence sent to Catholics and former Catholics trying to grasp the magnitude of the evil done?    The Church can on occasion still do good - I attended the funeral mass of a long time client and the service was beautiful and brought comfort to the grieving family. But until the stain of the sex abuse scandal is directly faced and the guilty severely punished, the Church's moral authority will continue to wither.  A piece The Americas Quarterly looks at the Church's plummeting influence in Latin America, once a bastion of Catholicism.  Here are excerpts:

When Buenos Aires Archbishop Jorge Bergoglio was elected the first Latin American pope, he was expected to take the helm of a Roman Catholic Church severely weakened by sex abuse scandals and by a growing secularity, and strengthen its influence in the region.

Indeed, since March 2013, Pope Francis has prioritized Latin America. His first trip abroad, in July 2013, was to Rio de Janeiro. Although he has not yet returned to his native Argentina, he has visited nine Latin American countries, making six stops in the region during his 22 trips abroad.

Though there is a widespread perception that the pope has made progress with the faithful, there is also growing criticism of his wavering response to cases of sex and child abuse committed by members of the clergy. This was evident during his visit to Chile and Peru from Jan. 15 to 21, when he was greeted with far less enthusiasm than his predecessors – particularly in Chile.

This is, in part, because Chile itself has changed. It is a more developed and secular country. Unlike during Pope John Paul II’s visit in 1987, there is no oppressive dictatorship violating human rights, which made the pastoral visit by the leader of the Catholic Church far less salient in the national public debate.

More than that, in recent years, Chile – and to a lesser extent and more recently Peru – has been shocked by revelations of sexual and child abuse committed by Catholic priests. Much of the papal visit was framed by the church’s limited official reaction to the scandal, and by the presence in all papal events of an active bishop who is accused of helping cover up the most notorious sex abuse cases.

The presence of the bishop of the city of Osorno, Juan Barros, 61, on the front lines of events and masses during the visit overshadowed the image of Francis for many Catholics, and marred his outreach and his message of repentance and reconciliation. . . . . Victims’ advocates demand his removal. Because Francis has not asked Barros to resign, many advocates allege that the Pope is not fully committed to combating what they call a culture of protecting abusers that still exists in the church.

Despite the two formal apologies issued by the Pope for the sex abuse scandals – he apologized in his first statement in Chile, then again a day later in a public meeting with members of the clergy – this impression was reinforced when, in an impromptu declaration, Francis asked for proof of the controversial bishop’s involvement in the sex abuse case. Though the pope later apologized to the victims for his words, among many Chileans the dominant perception is that the church has not fully realized the magnitude of the crisis and how its image has suffered. For too many Chileans, Francis’ apologies came too late, were not enough, and worse, they were undermined by his candid remarks and his inclusion of Barros.

To be fair, comparing Francis’ visit to that of John Paul II in 1987, when the country was still under the rule of Augusto Pinochet, is unfair. Today Chile is a buoyant democracy, and among the most developed countries in Latin America. Poverty in 1987 was over 40 percent; today, it is less than 5 percent.  Chileans then were in great need of a pastor who could give them hope. Today, Chilean society is far more secular, with fewer economic needs. Despite high levels of inequality, Chileans are hopeful about the future.

[T]he Catholic Church’s response to the allegations of sexual abuse and its organization of the visit – along with the unscripted comments by Pope Francis himself – will be remembered largely as a valuable missed opportunity to reach out to many Chileans who no longer see the Catholic Church as a part of their lives.

Add Chile to the list of countries like Ireland where the sex abuse scandal has left a one time bastion of the Church now a place where the Church holds no moral authority, and the Roman Catholic Church is rapidly headed towards becoming a largely black, Africa based church.  Francis - and others in the hierarchy remain oblivious to the reality that until severe punishments ate meted out to bishops and cardinals (and the Church's 12th century understanding of human sexuality changes), parishioners will continue to quietly drift away, many joining the ranks of the "Nones."