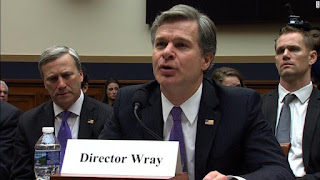 Seemingly thinking himself akin to some Roman emperor, Donald Trump, a/k/a Der  Trumpenführer, continues to ignore the fact that the FBI is designed to be a separate independent agency that does not take orders from the White House.  Instead, Trump believes the agency should do his bidding and that anyone who may want to investigate Trump's wrongdoing needs to be fired. Having fired James Comey who refused to back off of investigating Trump collusion with Russia and/or money laundering by Trump or Kared Kushner, Trump now is gunning for a the agency's deputy director.  The continued efforts to interfere and obstruct have apparently become so bad that the current FBI Director has threatened to resign and cause a media and political firestorm if the improper conduct doesn't stop.  Axios has these details:

Attorney General Jeff Sessions — at the public urging of President Donald Trump — has been pressuring FBI Director Christopher Wray to fire Deputy Director Andrew McCabe, but Wray threatened to resign if McCabe was removed, according to three sources with direct knowledge.

McGahn has been informed about these ongoing conversations, though he has not spoken with Wray about FBI personnel, according to an administration source briefed on the situation. Trump nominated Wray, previously an assistant attorney general under George W. Bush, last June to replace James Comey as director.

Trump has also tweeted negatively about other senior FBI officials who are allies of Comey, including the former top FBI lawyer James A. Baker who was recently “reassigned” after pressure from Sessions.

Trump and other Republicans have been hammering McCabe — who was selected by the White House as acting director after the Comey firing — for months on Twitter.

The New York Times — and others — reported in December that McCabe "is expected to retire after he becomes eligible for his pension [in] early [2018]." But senior Justice officials are still not sure what McCabe plans to do.

Posted by Michael-in-Norfolk at Tuesday, January 23, 2018