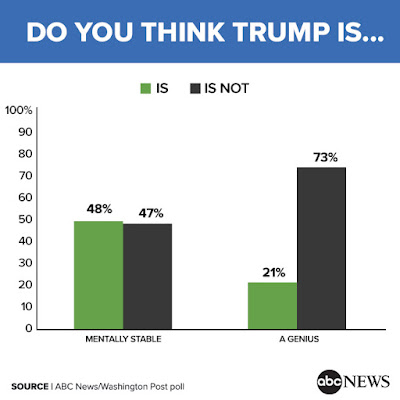 With the federal government in a GOP forced shut down and Donald Trump continuing to be the least popular president in the history of polling, congressional Republicans nonetheless continue to prostitute themselves to Trump.  Meanwhile just shy of half of Americans believe Trump is mentally unstable despite the bizarre press conference by the White House physician which seemingly added to Trump's height, downplayed potentially serious heart attack risks, and would have one believe that Trump is cognitively normal.    ABC News has the details of new poll results which ought to terrify Republicans in advance of the 2018 midterm elections which many see as the only meaningful way to limit Trump's ability to do lasting damage to America.  Here are poll findings that indicate that Trump and Republicans are on the wrong side of virtually every issue:

A year in the presidential spotlight hasn’t been kind to President Donald Trump: His approval rating is the lowest in modern polling for a president at this point, with deep deficits on policy and personal matters alike. Strikingly, the public divides evenly on whether or not he’s mentally stable.

Seventy percent say he fails to acquit himself in a way that’s fitting and proper for a president.

Two-thirds say he’s harming his presidency with his use of Twitter.

And 52 percent see him as biased against blacks -- soaring to 79 percent of blacks themselves.

Just 36 percent of Americans approve of Trump’s job performance, while 58 percent disapprove, essentially unchanged since midsummer. Next lowest at one year was Gerald Ford’s 45 percent in 1975; average pre-Trump approval -- since Harry Truman’s presidency -- is 63 percent.

Women are especially critical of Trump in this poll, produced for ABC News by Langer Research Associates: A mere 29 percent approve of his work, vs. 44 percent of men. And a remarkable 55 percent of women doubt Trump’s mental stability.

Trump’s signature achievement, the new tax law, is unpopular; 60 percent say it favors the wealthy (even most well-off Americans say so), and the public by a 12-point margin, 46 to 34 percent, says it’s a bad thing for the country. At the same time, a majority celebrates his most prominent failure, on Obamacare; 57 percent say the program’s continuation is a good thing.

A vast 87 percent support the DACA immigration program that Trump ended and whose fate in Congress is uncertain -- including two-thirds of strong conservatives, three-quarters of evangelical white Protestants and as many Republicans, core Trump groups.

And 63 percent overall oppose a U.S.-Mexico border wall, essentially unchanged since before the 2016 election.

As reported Friday, Trump -- and his party leaders -- also are at greater risk in the government shutdown, with Americans 20 points more likely to say they’d blame Trump and the Republicans in Congress than the Democrats in Congress.

[H]alf of Americans think members of Trump’s 2016 presidential campaign colluded with Russia to try to influence the election. About as many, 49 percent, think Trump himself obstructed justice in the Russia investigation.


One has to ask why Republicans seem to have a death wish and continue to basically flip a majority of citizens the middle finger.  Let's hope that get a return hand gesture at the polls in November, 2018.
Posted by Michael-in-Norfolk at Sunday, January 21, 2018