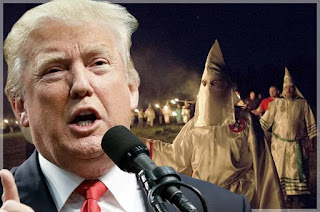 White evangelicals have been taking a much deserved beating over their support of thrice married, serial adulterer Donald Trump who now appears to have cheated on his third wife with at least one porn star.  The result is that evangelicals' have about as much moral authority as the Catholic Church that lectures people on the use of contraception while protecting the bishops and cardinals who protected thousands of predatory priests who preyed on children and youths for decades, if not far longer.   But the moral toxicity of the majority of evangelicals extends far beyond turning a blind eye towards repeated sexual infidelity - even as they rant about gay marriage - and extends to the racism that was a founding element of the so-called "Religious Right" as we know it today.  And because racism is the pillar of the political rise of evangelicals, as a column in the New York Times lays out, it should come as no surprise that evangelicals love the high priest of racism, Donald Trump.  Here are column excerpts:

In 1958, the Baptist preacher Jerry Falwell, who would go on to found the Moral Majority, gave a sermon titled “Segregation or Integration: Which?” He inveighed against the Supreme Court’s anti-segregation decision in Brown v. Board of Education, arguing that facilities for blacks and whites should remain separate.

“When God has drawn a line of distinction, we should not attempt to cross that line,” he wrote, warning that integration “will destroy our race eventually.” In 1967, Falwell founded the Lynchburg Christian Academy — later Liberty Christian Academy — as a private school for white students.

The Lynchburg Christian Academy, in Virginia, was one of many so-called seg academies created throughout the South to circumvent desegregation. In the 1970s, these discriminatory schools lost their tax-exempt status. Feeling under siege as a result, conservative Christians started organizing politically. This was the origin of the modern religious right, and it helps explain why a movement publicly devoted to piety has stood so faithfully by Donald Trump.

Dartmouth historian Randall Balmer quotes the conservative activist Paul Weyrich: “What caused the movement to surface was the federal government’s moves against Christian schools. This absolutely shattered the Christian community’s notions that Christians could isolate themselves inside their own institutions and teach what they please.” (This should sound familiar to anyone who has heard Christian conservative outrage over being forced to accommodate gay marriage.)

In 1980, the nascent religious right overwhelmingly supported Ronald Reagan, a former movie star who would become America’s first divorced president, over the evangelical Carter. In doing so, it helped destigmatize divorce. “Up until 1980, anybody who was divorced, let alone divorced and remarried, very likely would have been kicked out of evangelical congregations,” Balmer, who was raised evangelical and is now a scholar of evangelicalism, told me.

This week, Tony Perkins, leader of the Family Research Council, told Politico that Trump gets a “mulligan,” or do-over, on his past moral transgressions, because he’s willing to stand up to the religious right’s enemies.

On Wednesday, Jerry Falwell Jr., who inherited his father’s job as head of the evangelical Liberty University, defended Trump on CNN through an acrobatic act of moral relativism. . . . . To defend Trump, Falwell seems to be taking the position that no Christian has the right to criticize anyone else’s sexual behavior.

The people who are most disturbed by such theological contortions are earnest evangelicals who fear the disgrace of their religion. Trump’s religious champions, Michael Gerson writes in The Washington Post, are “associating evangelicalism with bigotry, selfishness and deception. They are playing a grubby political game for the highest of stakes: the reputation of their faith.”

I sympathize with his distress. But the politicized sectors of conservative evangelicalism have been associated with bigotry, selfishness and deception for a long time. Trump has simply revealed the movement’s priorities. It values the preservation of traditional racial and sexual hierarchies over fuzzier notions of wholesomeness.

“I’ve resisted throughout my career the notion that evangelicals are racist, I really have,” Balmer told me. “But I think the 2016 election demonstrated that the religious right was circling back to the founding principles of the movement. What happened in 2016 is that the religious right dropped all pretense that theirs was a movement about family values.” . . . This is one reason I find it hard to take seriously religious conservatives who say they are being persecuted for their defense of traditional marriage.

But it seems absurd to ask secular people to respect the religious right’s beliefs about sex and marriage — and thus tolerate a degree of anti-gay discrimination — while the movement’s leaders treat their own sexual standards as flexible and conditional.

Christian conservatives may believe strongly in their own righteousness. But from the outside, it looks as if their movement was never really about morality at all.