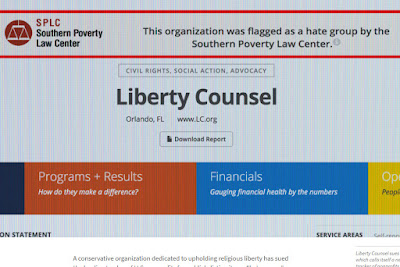 Many among the grifters, hate merchants and charlatans who make up a who's who of the so-called Christofascist have been highly overwrought by the hate group designations that they have rightly received from the Southern Poverty Law Center ("SPLC") - the same organization that tracks Neo-nazi and white supremacy groups.  That whining and bitching rose to new levels when GuideStar, a charity-information site that discloses to would be donors information of purported charities noted the hate group designation for Liberty Counsel, a viciously anti-gay organization that has disseminated malicious anti-gay lies and disinformation for literally decades.  The Chronicle Of Philanthropy looks at the ruling that was handed down by the U.S. District Court for the Eastern District of Virginia in Norfolk, Virginia.   Here are excerpts:

GuideStar, the charity-information site, scored a major victory as a federal court ruled it was in legal bounds to put a hate label on a nonprofit’s profile.

A federal judge in Virginia dismissed a lawsuit against GuideStar pursued by the conservative Christian legal-defense group Liberty Counsel.

Liberty Counsel sued after a label was placed on its GuideStar profile page noting that the legal organization had been designated a hate group for its anti-LGBTQ stances. Liberty Counsel said the label was defamatory and hurt its reputation. It also charged that the label violated a federal law against unfair competition and false advertising.

Judge Raymond Jackson of the Federal District Court in Norfolk, Va., however, said the designation was “an informative statement” and “not commercial speech” in his ruling— and rejected Liberty Council’s claim that its business was affected. Mr. Jackson also dismissed the legal group’s defamation claim.

Liberty Counsel said in statement Wednesday that it is considering an appeal of the decision.

GuideStar added warning banners last year to the profile pages of 46 organizations, including Liberty Counsel, to notify visitors that the Southern Poverty Law Center had accused the charities of spreading hate. The message directed visitors to the anti-hate group’s website.

GuideStar announced it was pulling the warning labels last June after the designations caused a firestorm among conservative groups that said they had been unfairly targeted.
The nonprofit information site said it backed away from the labels after its staff members had faced threats to their personal safety from opponents of the labels.

The groups that have received these "hate group" labels  purport to be "Christian" organizations, most claiming the "family values" label.  If anyone questions the hate group label in the case of Liberty Counsel - or Family Research Council and numerous "Christian" organizations, I invite them to visit SPLC's site and look at the documentation.  I defy them to describe the conduct described in any way Christian .  It is also noteworthy that Guidestar backed away from the labels due to threats to its employees by supporters of these bogus charities.  In all of my years of writing this blog, the only death threats I have received has been from "devout Christians."  No Muslims have threatened me - and I am just as hard on Islam as Christianity - nor has anyone else.
Posted by Michael-in-Norfolk at Thursday, January 25, 2018