Ex-GOP Chair to Evangelicals: ‘Don’t Ever Preach to Me Again!’ 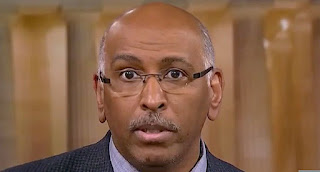 For a long time now I have been making the argument that it is becoming increasingly impossible for an honest and moral person to remain a Republican.  That argument applies even more so to evangelical Christians.  Honesty and true morality and their allegiance to Donald Trump are simply mutually exclusive.  A growing number of Republicans - I wonder how long until some leave the GOP entirely - have become utterly nauseated with the Trump/evangelical love fest.  The other day, I quoted in part from a column by former George W. Bush White House official Michael Gerson and, much to my surprise, I received a personal email from him thanking me for reading his columns and further elaborating on his frustrations. Now, we have Michael Steele, former chairman of the Republican National Committee, stating on national television that he is disgusted by and basically washing his hands of evangelicals loyal to Trump.  Raw Story looks at this  honest and heartfelt statement of the truth:

“When it comes down to giving Trump a pass, some top evangelical leaders are turning a blind eye to his past discretions and came to his defense following recent reports about his alleged affair with adult film star Stormy Daniels,” host Chris Matthews explained.

“I have very simple admonition: just shut the hell up and don’t preach to me about anything ever again,” Steele suggested.

“They have no voice of authority anymore for me,” Steele concluded.


Steele is 100% correct - I was watching when he made the statements - and my Republican "friends" who continue to blindly vote for GOP candidates and then park their butts in church pews on Sunday mornings need to take a good look at themselves in the mirror and ask themselves what happened to their honesty, integrity and simple morality?   You do not get to have it both ways.  Kudos for Steele for speaking the truth.

Posted by Michael-in-Norfolk at Wednesday, January 24, 2018