Kathleen Parker: What Is Trump Hiding? 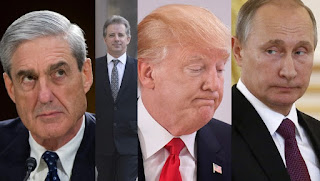 Conservative columnist Kathleen Parker - who may or may not identify as a Republican any longer - has a column in the Washington Post that reviews what we do know so far about the Russiagate investigation and reaches the logical conclusion that Trump is definitely hiding something.  The big question, of course, is what is it?  But the old adage that if you do not have something to hide, then people normally do not act as if they do, much less try to impede investigations that will turn up nothing if one is innocent.  Despite Trump's claims that there was no collusion with Russia, the fact is that since he lies on average 5 or 6 times a day to the American public, a majority of Americas now are at a point where they simply do not believe anything that the man says since the odds are high that he's lying. Add this constant dishonesty to what we know and the only safe take away is as Parker concludes: he is hiding something. Here are column excerpts:

Conspiracies. Secret societies. Witch hunts.  During the past year, we’ve heard reference to all of the above to explain away any suggestion of collusion between the Trump campaign and Russia in the 2016 presidential election.

There are lots of other dots in this constellation of rumor and innuendo, as well as documented facts and events that can be easily corroborated. Objectively, it is neither conjecture nor conspiracy to observe that the president strikes a defensive pose every time a well-sourced article reveals something that could seem incriminating. Indeed, he has become Clintonesque, reflexively dodging and covering up, whether he needs to or not.

Thus, the question is whether Trump is hiding something, an obvious inference, or whether his observably narcissistic personality means he can’t tolerate even the suggestion that he may be at fault. The narcissist’s first instinct is always to blame others. Combined with his excessive need for admiration, another narcissistic trait, it is conceivable that Trump punches back as a function of a personality disorder.  Whatever the verdict, either possibility inspires shivers.

These are the facts thus far:

First, Trump fired FBI Director James B. Comey in May — after, according to Comey, Trump asked him for loyalty and to drop the probe into former national security adviser Michael Flynn, whose three-week tenure ended upon revelations that he lied about conversations with Russia’s ambassador to the United States. Flynn subsequently pleaded guilty to lying in exchange for his cooperation with the Russia investigation. . . . this episode is factual.

Trump also asked Attorney General Jeff Sessions not to recuse himself from the Justice Department’s investigation into possible collusion. But Sessions did recuse himself for sound reasons and, for a brief spell, became a target of Trump’s Twitter feed.

Then Trump began pressuring Sessions to fire acting FBI director Andrew McCabe, tweeting that McCabe’s wife, Jill McCabe, had received $700,000 from the Clintons for her 2015 run for a Virginia state Senate seat. His implication was that McCabe couldn’t possibly be objective if his wife was supported by the Clinton machine. Life teaches us that untrustworthy people or people lacking personal integrity always suspect that others are the same.   The truth is, Jill McCabe received about $500,000 from a political action committee affiliated with then-Virginia Gov. Terry McAuliffe.

Then, a few days ago, reports surfaced that Trump in June ordered the firing of Mueller. When White House Counsel Donald F. McGahn threatened to quit rather than carry out the command, the president backed off. Meanwhile, we also learned that Mueller wants to interview Trump about Flynn, Comey and the president’s outreach to several top Republicans to quickly end the Senate Intelligence Committee’s own investigation into possible Trump-Russia collusion in the election.