Will Evangelicals' Support of Trump Be Their Undoing? 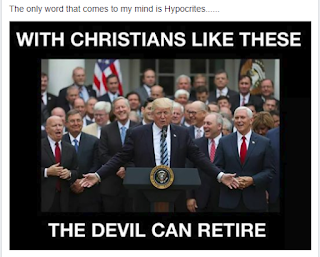 I have been following evangelical groups for well over two decades.  My first exposure was during my years as a Republican Party activist and member of the City Committee of the Republican Party of Virginia Beach which I helped incorporate.  Over the years my impression of evangelical leaders and their followers has basically gone down with every passing day, month and year.  Much fanfare is put on to supposedly demonstrate their piety and religiosity, but in the final analysis, as a group, no on lies more often and more insidiously or is more self-centered and oblivious to the Gospel message of loving others and caring for the poor, the sick, homeless and needy in the world. And that's not even counting in the "scamvangelists" who push the prosperity gospel and rake in millions and live lives of conspicuous consumption, huge mansions, private jets, etc.   Indeed, the true mark of far too many evangelicals is hatred of others, racism, rejection of knowledge and science and a mindset that the end justifies the means, no matter how reprehensible.   Their continued support of Donald Trump underscores the moral bankruptcy of these individuals and their self-anointed leaders.  As a piece in the Washington Post suggests, with luck they will lose what little moral authority they have left with the general public.  It's already happened with Millennials.  Now it needs to happen across the board.  Here are article highlights:

Few voting blocs back President Trump as strongly as white evangelicals. Many of them on Friday reminded the world why as they descended upon Washington for the March for Life, one of the nation's largest antiabortion gatherings.

Trump became the first sitting president to address the event and reminded those in attendance that ending legal abortion and protecting religious freedom, issues on which he campaigned, will remain priorities for him throughout his administration.

At the rally, House Speaker Paul D. Ryan (R-Wis.) credited God for Trump’s election, saying: “Can we just thank God for giving us a pro-life president back in the White House?”

While not specifically a religious event, the annual march on the Mall in Washington attracts evangelicals, Catholics and conservative Christians who share a common goal of overturning Roe v. Wade, the Supreme Court ruling on abortion rights.

Before entering the 2016 presidential election, Trump was better known for his “Playboy” tendencies than possessing conservative Christian values, but many evangelicals embraced Trump as he ran for the Republican presidential nomination. Jerry Falwell Jr., the son of the founder of the Moral Majority movement and president of Liberty University, went so far as to call Trump “a dream president.”
Their support has not wavered much, even after the recent claim by porn star Stormy Daniels that Trump had an affair with her and paid her hush money before the election. For many evangelical voters, moving America forward means continuing to support the most antiabortion candidate regardless of his track record on any other moral issue. A recent testament of that came last month, when white evangelical voters in Alabama overwhelmingly backed Senate candidate Roy Moore, despite his facing allegations of sexually assaulting multiple teenage girls while in his 30s. For a group of people who regularly view themselves as soldiers in a culture war, there is some belief that evangelicals could wind up losing the overall fight for moral authority over the country and the world.

While many white evangelicals are unapologetic about being one-issue voters when it comes to abortion, others within and outside of the Christian faith argue other topics — including character and “loving your neighbor as yourself” — must be of high importance in deciding who will lead the country forward. These voters say a comprehensive conversation about family values has to include issues beyond abortion and are looking for candidates who are willing to do that.
Trump's recent reported reference to Haiti, El Salvador and countries in Africa as “shitholes” caused conservative blogger Erick Erickson to question if some evangelicals had reached a breaking point with the president and the Republican Party. In an Acts of Faith post, he questioned the impact this would have on the 2018 elections and beyond:

These evangelicals are patriotic Americans, but their Christianity comes first and they realize they cannot separate their vote from their faith. As they see fellow Christians beclowning themselves to defend the indefensible, they want no part of it. So they will wash their hands of it and stay home or they will join African American and Hispanic Christians in voting for those who have spoken loudly against the rise of white nationalism and Trump’s abhorrent behavior.

Winning the White House has always been important to evangelicals. But historically, winning people to the Christian faith has taken higher priority. To some within the tribe, it appears the former has replaced the latter.