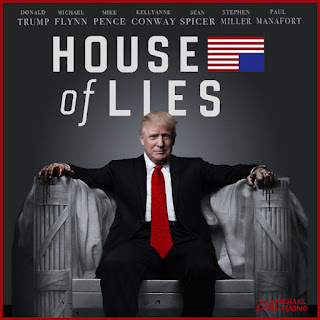 Several news outlets have scrutinized Donald Trump's statements for truth and veracity and over 3/4th are untrue or largely untrue.  Stated more directly, Trump lies roughly three quarters of the time. As the Russiagate investigation continues, it is quickly becoming apparent that most of those in the Trump campaign and now the Trump/Pence regime have similar problems with telling the truth be it Jeff Sessions who is either a complete liar or so wracked with dementia that he is unfit for office to Sarah Huckabee Sanders who lies daily at White House Press conferences (being raised by a Baptist preacher, she learned to lie from a master).   Conservative columnist Michael Gerson - who was a member of the George W. Bush White House staff - looks at the huge accumulation of lies that the Russiagate investigation has exposed to date.  There is every expectation that even more will follow.  Here are column highlights which also contain an indictment of evangelical Christians supporting Trump (and Roy Moore):

I spent part of my convalescence from a recent illness reading some of the comprehensive timelines of the Russia investigation (which indicates, I suppose, a sickness of another sort). One, compiled by Politico, runs to nearly 12,000 words — an almost book-length account of stupidity, cynicism, hubris and corruption at the highest levels of American politics.

The cumulative effect on the reader is a kind of nausea no pill can cure. Most recently, we learned about Donald Trump Jr.’s direct communications with WikiLeaks — which CIA Director Mike Pompeo has called “a non-state hostile intelligence service often abetted by state actors like Russia” — during its efforts to produce incriminating material on Hillary Clinton during the 2016 election. But this is one sentence in an epic of corruption. There is the narrative of a campaign in which high-level operatives believed that Russian espionage could help secure the American presidency, and acted on that belief. There is the narrative of deception to conceal the nature and extent of Russian ties. And there is the narrative of a president attempting to prevent or shut down the investigation of those ties and soliciting others for help in that task.

In all of this, there is a spectacular accumulation of lies. Lies on disclosure forms. Lies at confirmation hearings. Lies on Twitter. Lies in the White House briefing room. Lies to the FBI. Self-protective lies by the attorney general. Blocking and tackling lies by Vice President Pence. This is, with a few exceptions, a group of people for whom truth, political honor, ethics and integrity mean nothing.

What are the implications? President Trump and others in his administration are about to be hit by a legal tidal wave. We look at the Russia scandal and see lies. A skilled prosecutor sees leverage. People caught in criminal violations make more cooperative witnesses. Robert S. Mueller III and his A-team of investigators have plenty of stupidity and venality to work with. They are investigating an administration riven by internal hatreds — also the prosecutor’s friend. And Trump has already alienated many potential allies in a public contest between himself and Mueller.

But the implications of all this are not only legal and political. We are witnessing what happens when right-wing politics becomes untethered from morality . . . . What does public life look like without the constraining internal force of character — without the firm ethical commitments.

It looks like a presidential campaign unable to determine right from wrong and loyalty from disloyalty. It looks like an administration engaged in a daily assault on truth and convinced that might makes right. It looks like the residual scum left from retreating political principle — the worship of money, power and self-promoted fame. The Trumpian trinity.

It looks like Breitbart News’s racial transgressiveness, providing permission and legitimacy to the alt-right. It looks like the cruelty and dehumanization practiced by Dinesh D’Souza, dismissing the tears and trauma of one Roy Moore accuser as a “performance.” And it looks like the Christian defense of Moore, which has ceased to be recognizably Christian.

This may be the greatest shame of a shameful time. . . . . A hint: It is the institution that is currently — in some visible expressions — overlooking, for political reasons, credible accusations of child molestation. Some religious leaders are willing to call good evil, and evil good, in service to a different faith — a faith defined by their political identity. This is heresy at best; idolatry at worst.

Many of the people who should be supplying the moral values required by self-government have corrupted themselves. The Trump administration will be remembered for many things. The widespread, infectious corruption of institutions and individuals may be its most damning legacy.

Perhaps the biggest loser in all of this - assuming Trump doesn't trigger a nuclear war that kills countless millions - is Christianity which through the actions of evangelicals and fundamentalist Christians have shown the faith to be morally bankrupt.  They have, of course, had plenty of assistance from the Roman Catholic Church which still has not been honest about its worldwide sex abuse scandal. Combined, the net effect is that fewer and fewer want any connection to organized Christianity.  Hence why one-third of those under 30 years of age have walked away.  Expect the trend to accelerate and spread to older generations.
Posted by Michael-in-Norfolk at Friday, November 17, 2017