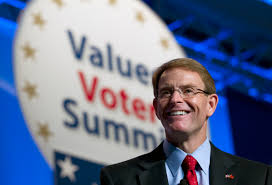 A piece in the Washington Post provides a good demonstration of how evangelicals have sold their souls and thrown aside morality in their quest for political power - and money among leadership circles.  Perhaps one of the foulest "family values" organizations, in my opinion, is Family Research Counsel ("FRC") which hosts the "Values Voter Summit" each year to which Republican office holders and candidates flock to genuflect to the group's leader Tony Perkins.  Perkins has documented ties to white supremacist groups and disseminates an endless stream of lies about LGBT citizens, blacks, Muslims, Hispanics and others that savages the gospel message literally daily.  Yet despite this, in 2016 he was allowed to author a portion of the GOP national platform.  Now, in the wake of the resignation of Ohio state Rep. Wesley Goodman who was caught having sex with a man in his office, we learn how Perkins and FRC turned a blind eye toward sexual misconduct by Goodman with a teenager at a FRC sponsored event.  It goes without saying that Perkins and FRC have been silent in the Roy Moore sex scandal.  Here are article highlights:

On a fall evening two years ago, donors gathered during a conference at a Ritz-Carlton hotel near Washington to raise funds for a 31-year-old candidate for the Ohio legislature who was a rising star in evangelical politics.

Hours later, upstairs in a hotel guest room, an 18-year-old college student who had come to the event with his parents said the candidate unzipped his pants and fondled him in the middle of the night. The frightened teenager fled the room and told his mother and stepfather, who demanded action from the head of the organization hosting the conference.

“If we endorse these types of individuals, then it would seem our whole weekend together was nothing more than a charade,” the stepfather wrote to Tony Perkins, president of the Council for National Policy.

“Trust me . . . this will not be ignored nor swept aside,” replied Perkins, who also heads the Family Research Council, a prominent evangelical activist group. “It will be dealt with swiftly, but with prudence.”

The incident, described in emails and documents obtained by The Washington Post, never became public, nor did unspecified prior “similar incidents” Perkins referred to in a letter to candidate Wesley Goodman. The correspondence shows Perkins privately asked Goodman to drop out of the race and suspended him from the council, but Goodman continued his campaign and went on to defeat two fellow Republicans in a hotly contested primary before winning his seat last November.

Goodman, 33, abruptly resigned this week after state legislative leaders learned of what the House speaker called “inappropriate behavior related to his state office.” Local media outlets have reported the behavior involved a consensual sexual encounter with a male visitor in his legislative office.

Emails and documents show a small circle of people discussed the complaints about Goodman before he went on to later misconduct at the statehouse.

In Ohio, supporters of Goodman’s campaign wondered why they were not alerted to his past behavior. “We are so sick of people knowing and doing nothing. If someone knew, they had an obligation to say something. That’s what you do. That’s how you hold society together,” said Thomas R. Zawistowski, president of Ohio Citizens PAC, a conservative group that endorsed Goodman.

Perkins did not respond to emails, phone calls or a message left at the office of the Family Research Council. Goodman declined to comment as did the stepfather, a member of the council who referred questions about the incident to Perkins.

The Oct. 18, 2015 incident involving Goodman was discreetly handled by Perkins, the council’s president and a prominent leader on the religious right. Goodman at the time was campaigning for office after an impressive run in Washington as a congressional aide who rose to managing director of a conservative coalition Perkins oversees. He worked for the Perkins-run network from February 2013 to March 2015.

Perkins’s CNP raised money for Goodman at an Oct. 18 event that brought in donations from GOP stalwarts like former attorney general Edwin Meese and Marjorie Dannenfelser, president of the antiabortion Susan B. Anthony List, according to Goodman’s campaign finance reports.

Goodman was close to the CNP as managing director of the Conservative Action Project, a group formed by CNP to counter President Obama’s agenda, including the Affordable Care Act.

As president of the Family Research Council, which opposes same-sex marriage and abortion and calls homosexuality “unnatural,” Perkins supports traditional values in U.S. politics and wields considerable clout in his political endorsements. His endorsement of Trump in July 2016 helped evangelicals overcome doubts about the GOP nominee.

The CNP is a tax-exempt 501(c)3 group founded in the early 1980s, and its membership has included prominent figures in the conservative movement such as Breitbart News chairman and former White House adviser Stephen K. Bannon, White House counselor Kellyanne Conway and embattled Senate candidate Moore.

Note the Roy Moore connection. Thankfully, the Southern Poverty Law Center has designated FRC as a hate group.  Unfortunately, it remains a king maker in evangelical and Republican circles despite, in my view, Perkins' nasty history and total willingness to put his quest for power (and his lucrative income) ahead of morality and honesty.

Posted by Michael-in-Norfolk at Saturday, November 18, 2017