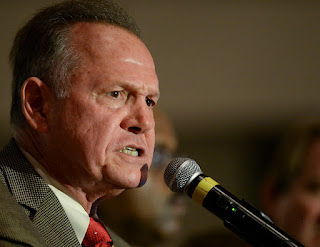 I lived in Alabama for over four years years ago and I have been a member of the Alabama State Bar for over 40 years.  Thus, I continue to feel a connection with and ties to Alabama.  The ongoing soap opera like story line involving Roy Moore, who was twice thrown off the Alabama Supreme Court - which makes a strong case for appointed judicial positions notwithstanding the partisan games that surround Virginia's system - underscores the almost schizophrenic nature of of Alabama which, in my view has worsened significantly since the rise of Christofascists within the Republican Party base ( a similar descent into depravity has overtaken the GOP nationwide and certainly in Virginia).  With yet another accuser coming forward today, we find competing stories on AL.com, one of which looks at 53 right wing churches coming out in support of Moore, while another reports that Moore's predatory behavior during the time frame in question was common knowledge.  First, these highlights on the fact that Moore's behavior was common knowledge among locals:

Roy Moore's penchant for flirting with teen girls was "common knowledge" and "not a big secret" around Gadsden, according to some area residents.

The Senate candidate has denied any wrongdoing in the wake of a report from The Washington Post in which four women accused Moore of inappropriate advances - and in one instance, a sexual encounter - toward them when they were teens and he was in his early 30s.

Moore and other Republican leaders have questioned why it took so long for his accusers, now in their 50s, to come forward publicly.   And yet people who lived in Etowah County during that time have said Moore's flirting with and dating much younger women and girls was no secret.

"These stories have been going around this town for 30 years," said Blake Usry, who grew up in the area and lives in Gadsden. "Nobody could believe they hadn't come out yet."  Usry, a traveling nurse, said he knew several of the girls that Moore tried to flirt with.  "It's not a big secret in this town about Roy Moore," he said. "That's why it's sort of frustrating to watch" the public disbelieve the women who have come forward, he said.

[T]he Gadsden Mall. . . . opened to great fanfare in 1974, anchored by department stores like Pizitz, Belk Hudson and Sears. It had a movie theater, lounge, drug store and restaurants including Morrison's Cafeteria.  It soon became a popular local hangout, especially for teenagers.

Wendy Miller told The Post that she was 14 and working as Santa's helper at the Gadsden Mall in 1977 when Moore first spoke with her and told her she looked pretty. Two years later, when she was 16, he asked her out on dates, although her mother wouldn't let her go.

"He would go and flirt with all the young girls," he said. "It'd seem like every Friday or Saturday night (you'd see him) walking around the mall, like the kids did."Five other current and former Etowah County residents also spoke to AL.com with similar accounts.  "Him liking and dating young girls was never a secret in Gadsden when we were all in high school," said Sheryl Porter. "In our neighborhoods up by Noccalula Falls we heard it all the time. Even people at the courthouse know it was a well-known secret.

"It's just sad how these girls (who accused Moore) are getting hammered and called liars, especially Leigh (Corfman)."

Tony Hathcock is a photographer in Gadsden who told CBS News that he's known Corfman well for five years and believes her. They are both very conservative Republican voters, he said, and both voted for Trump. He said she had nothing to gain from speaking out, but felt safe speaking out now because her children are now adults.

He said that growing up in Gadsden, he'd heard rumors about Moore. Last week, he posted on Facebook a defense of Corfman. He said that even as a middle-schooler in Gadsden he'd heard stories from people he knew about Moore's behavior making them uncomfortable.

Yet despite these local citizens corroborating the accusations of now 5 women, 53 churches in Alabama - all but one located outside of the state's two largest cities - have come out in support of Moore.  As, in my view, expected, most are members of Baptist and evangelical denominations where truth, veracity and objective facts simply do not matter.  Here are excerpts:

Kayla Moore, wife of Alabama Senate candidate Roy Moore, shared a letter on Facebook over the weekend indicating support from more than 50 Alabama pastors. Moore's wife Kayla posted the letter to her Facebook page Sunday after days of controversy surrounding her husband and allegations he had sexual contact with a 14-year-old in 1979 when he was 32-years-old. Three other women said Moore pursued them as teenagers. The letter was posted before a fifth woman, Beverly Young Nelson, came forward with additional charges Monday.
In their letter, the pastors said Moore was an "immovable rock in the culture wars," and has met attacks with a "rare unconquerable resolve." Moore's campaign did not respond to questions related to the letter or why it was posted with the date and identifying information removed. At least one of the pastors listed as supporting Moore is no longer at the church listed on the letter. Screenshots show the letter posted by Kayla Moore and the original from Roy Moore's website

Read the full piece and review the names of the churches/pastors  who have chosen to support Moore despite what is increasingly damning information and corroborated information.  The moral bankruptcy of these churches is near complete. They represent yet another reason of why decent, moral people may want to disassociate themselves from ther "Christian" label.
Posted by Michael-in-Norfolk at Tuesday, November 14, 2017