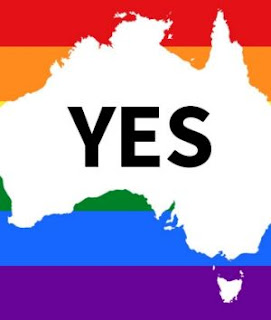 Despite the efforts of the sex abuse scandal plagued Roman Catholic Church and reactionary Christian denominations - some of which were aided by American Christofascist and their hate group organizations - Australians overwhelmingly voted "Yes" for marriage equality.  Now, it is up to that nation's parliament to enact a bill that puts in place laws consistent with the will of its citizens.  The Sydney Morning Herald looks at the results of the vote.  Here are excerpts:

A majority of people in every state and territory said Yes. The Yes vote was largely consistent, representing 60-65 per cent of the vote in all but two states and territories. In the ACT, nearly three quarters of the population said yes (74 per cent) while in NSW only 57.8 per cent was in favour of same-sex marriage.

More than three quarters of the Australia’s eligible voters took part, with the Northern Territory (58.7 per cent) the only state or territory to not reach that level.
Only 17 of Australia’s 150 electorates voted No. Most of these (12) were in New South Wales. Three electorates in Queensland voted No, and two in Victoria. That means every single electorate in Australia’s five smallest states and territories voted Yes.

Yes votes reached up to 83.7 per cent in the inner-city electorates of Melbourne and Sydney.

It may host the annual Mardi Gras but Sydney is not as gay-friendly as it may seem. The Yes vote was lower in Sydney (55.3%) than in any other of Australia’s five biggest cities. In fact the Yes vote in Perth, Brisbane, Melbourne and Adelaide was almost identical - all falling within one per cent of each other.

In everywhere but NSW, city-dwellers were more likely to vote Yes than people in regional areas.

The overall participation rate was nearly 80 per cent, a very high number for a voluntary survey. More than 70 per cent of eligible voters in every single age bracket took part.

Be prepared to see right wing Christians in Australia begin to claim that they are being persecuted because they are unable to inflict their beliefs on all of Australian society.
Posted by Michael-in-Norfolk at Wednesday, November 15, 2017