How to Build a Consistent Democratic Majority 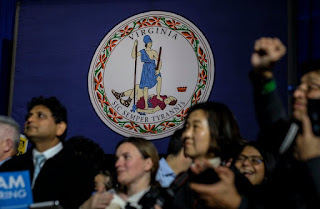 Last night as the husband and I baked cookies and other food items that he will use to cater his salon between Thanksgiving and Christmas Eve, we chatted with our Ralph Northan staffer who has lived with us since July 4th.  The conversation revolved in part about whether he thought he be back in Virginia next year - he is from Florida and leaves us on Tuesday - and what the Democrats needed to do to expand last Tuesday's election victories to Virginia's congressional districts, guaranty Tim Kaine's reelection to the U.S. Senate, and how to turn more states "blue."  In my view (which is based on my experience first as a GOP activist and now as someone actively opposing the toxic agenda of today's GOP), the ground game that Ralph Northam put in place should be replicated next year nationwide, especially in suburban areas.   A column in the New York Times by David Brooks - a long time GOP apologist who far too belatedly became a critic of the Christofascists and and worse elements of the GOP - lays out why this strategy could be the key to making progressive and the Democrats the majority political force going forward.  Here are column excerpts:

We’re all familiar with a certain political geography. Democrats win the cities, Republicans win the rural areas, and the battlegrounds are in the suburbs. In general, Democrats win the denser inner-ring suburbs where there are lots of professionals — doctors, lawyers, teachers. Republicans win the sprawling outer-ring suburbs, where there are lots of office parks and midlevel corporate managers.

But we’re living in an age of global populism, a historic transition as profound as those in 1848, 1905 and 1968. Around the world, the old political divides are being replaced, and political geographies are being redrawn. One way to capture the emerging divide is by using the British writer David Goodhart’s distinction between Somewheres and Anywheres.

Somewheres are rooted in their towns and have “ascribed” identities — Virginia farmer, West Virginia coal miner, Pennsylvania steelworker. Anywheres are at home in the global economy. They derive their identity from portable traits, like education or job skills, and are more likely to move to areas of opportunity.

Somewheres value staying put; they feel uncomfortable with many aspects of cultural and economic change, like mass immigration. Anywheres make educational attainment the gold standard of status and are cheerleaders for restless change.

The thing about this new set of battle lines is this: It redraws the political map. The cities are dominated by Anywheres. The rural areas are dominated by Somewheres. But the growing suburbs are no longer divided. They are Anywhere all the way through. Last Tuesday, exurban Loudoun County went Democratic 60 to 40 percent. That’s nearly the same as inner-ring Fairfax County, which went Democratic 67 to 31 percent. These days, only a tiny percentage of Northern Virginia workers are government employees. Instead, the region is defined by the two big drivers of Anywhere culture: highly educated information age workers and fiercely energetic immigrants. Trump’s party is not at home on this ground and can’t play on it. Trumpians just want to wall it off. “DC should annex NOVA and return the governance of Virginia to Virginians!” Jerry Fallwell Jr. tweeted, referring to Northern Virginia, after the election results.

Populism has made the Republicans a rural party and given the Democrats everything else. In Virginia, Democrats won by a landslide among anybody who grew up in the age of globalization. Among voters 18-29, they won by an astounding 69 to 30 percent. Among voters 30-44, they won by 61 percent to 37 percent.

We could be seeing the creation of a new Democratic heartland, exurbia, and this alignment could hang around for a while.

The Democrats won because the Republicans decided to shrink their coalition. . . . . . The crucial question going forward is what will the Democrats do? Will they make places like Loudon County their heartland, or will they amputate themselves the way the Republicans did, and retreat back to the cities?

Here’s how you can tell which way the Democrats are going. If they talk mostly about oligarchy and rich financiers, they are retreating to their base. But if they talk about mobility — geographic mobility, economic and social mobility, intellectual and spiritual mobility, they are talking the language of the suburbs. And if they have practical plans to enhance universal mobility, the age of Democratic dominance will be at hand.

Posted by Michael-in-Norfolk at Sunday, November 12, 2017