Mike Pence Is Intertwined in the Russia Scandal 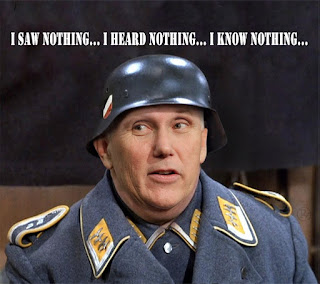 Like the ever, in my view, despicable Jeff Sessions, Mike Pence acts sanctimonious and wears his right wing Christian faith on his sleeve.  Yet, like Sessions, Pence seemingly has a big problem when it comes to truth and veracity.  The only other explanation for Pence's constant back tracking on statements - or perhaps lies - is that he is an idiot and has been played like a gullible fool by Der Trumpenführer and his sycophants.   Over the last 20+ years that I have followed Christian "family values" groups, the one thing that is striking is the abandon with which the "godly folks" lie almost constantly.  This is precisely the background from which Pence derives his "Christian beliefs" - a background where lying to further theocratic goals is completely acceptable.  It's as if the Commandment against lying and bearing false witness doesn't exist.  It is in this context that a column in the Washington Post looks at Pence's incredible claims that he knew nothing of the Trump campaign's contacts with Russia.  Here are column highlights:

Vice President Pence is hip-deep in the Russia scandal, his best defense being that he was inattentive or an easily manipulated dunce. His home-state paper, the Indianapolis Star, reports:

Another of Vice President Pence’s past statements came back to bite him this week. This time it had to do with his denial last year that the Trump-Pence campaign had been in contact with WikiLeaks.

Donald Trump Jr. on Monday shared several messages he exchanged during the 2016 campaign with WikiLeaks around the time it was publishing leaked and secret material from Democrats. Those messages were exchanged in the fall, leading up to Trump’s eldest son tweeting out a link to WikiLeaks’ documents on Oct. 14, 2016, the same day Pence was asked by Fox News to respond to suggestions “that your campaign is in cahoots with WikiLeaks.”

“Nothing could be further from the truth,” Pence responded. “Here you see the national media chasing after unsubstantial allegations, the allegations that Donald Trump has categorically denied.”

Pence has a trail of inaccurate statements concerning the Trump campaign and Russia, nearly as many as the memory-challenged attorney general.

Consider the hiring of former national security adviser Michael T. Flynn. . . . . Flynn also lied to the vice president about his contacts with Russian officials during the transition, a lie that set in motion Sally Yates’s conversation with the White House general counsel and ultimately resulted in Flynn’s resignation, the opening of the Russia probe and the firing of former FBI director James B. Comey.

When Trump wanted to lean on Comey to drop the investigation of Flynn, he ordered both Pence and Attorney General Jeff Sessions out of the Oval Office. Put that down as evidence that Pence was being kept in the dark.

However, Pence reportedly was present at the Oval Office meeting where Trump read the draft memo concerning his decision to fire Comey. That memo apparently was a screed about Comey’s handling of the Russia probe. Pence subsequently related to Congress and the press the phony cover story that Deputy Attorney General Rod J. Rosenstein had cooked up, namely that Comey had improperly handled the investigation into Hillary Clinton’s emails. Pence denied Comey was fired over the Russia investigation, a position Trump swiftly contradicted in his interview with NBC News’s Lester Holt.

[L]ike now-embattled Attorney General Jeff Sessions, Pence repeatedly denied that the campaign had any contacts with the Russians. Perhaps Pence knew and forgot, perhaps he knew and lied on behalf of the president, or perhaps he was kept in the dark.

At some point, special counsel Robert S. Mueller III almost certainly will want to interview Pence. (Pence’s lawyer reportedly met with Mueller over the summer.) At that point, Pence will need to explain how it was that he never learned in real time about Flynn’s legal problems as an unregistered foreign agent, never knew about campaign or transition contacts with Russians and/or WikiLeaks and didn’t know that Comey was being fired at least in part because of the Russia episode.

[O]ne wonders why he would want to continue serving in an administration that uses him to deceive Congress, the press and the public. At some point, if Pence is an innocent man wrapped up in a web of dishonesty and subterfuge, you’d think he’d get angry, refuse to carry the president’s water and even quit.

In any event, Pence’s political future is dim. If he’s complicit in a coverup, he’s in legal peril. If he’s not, he’s a fool and a pawn, someone far too naive to be entrusted with power.

Like Trump, Pence needs to be removed from office.

Posted by Michael-in-Norfolk at Thursday, November 16, 2017