Stephen Miller May Have Some Russia Problems 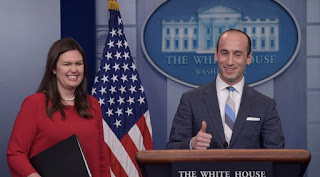 It seems that with few exceptions there are two commonalities between senior members of the Trump presidential campaign and the now inner circle of the Trump/Pence regime: efforts to secure contacts with Russia operatives and lying about said contacts. A piece in Talking Points Memo looks at yet another member of Der Trumpenführer's inner circle who has his finger prints all over efforts at collusion and the firing of James Comey as Comey began to connect the dots linking the Trump campaign to a conspiracy with a foreign enemy.  That individual is the vile Stephen Miller, one of the proponents of Trump's racist/white nationalist agenda.  Here are column excerpts:

Fascinating piece here in the Times applying some Times level sleuthing to shed more light on those Papadopoulos court documents from last week. We get some idea of the backstory of Joseph Mifsud, apparently a failing and shambling academic career that was on its final skid when Russians showed up in 2014 with money and newfound respectability, an old story. Other gaps of the story are filled in. But the big one is Stephen Miller. According to the Times, Miller is the “senior policy advisor” referenced in the Papadopoulos court documents. He was the only unnamed player still unidentified. This means that Miller was one of the top Trump advisors Papadopoulos was keeping posted on his efforts to set up meetings between Russian officials and Trump campaign officials, perhaps even (preposterous as it may seem) a meeting between Trump and Putin himself. This revelation is important for at least three reasons.

First: The most mundane is that Miller was at the highest level of Trump’s campaign advisors and remained in at least as high a role into the White House and up until today. He is within the innermost circle.

Second: Miller was also one of the advisors pressing hard for President Trump to fire James Comey. Indeed, Mueller’s investigators just interviewed Miller, apparently mainly about the Comey firing. Miller was one of the small group of Trump lickspittles who accompanied the President on the lost weekend at Bedminster when he stewed over Comey and resolved to fire him on his return. He also wrote a first draft of Trump’s firing letter, which the grownups back in Washington, horrified, dramatically revised. In short, Miller’s hands are all over the Comey firing. Now that we know he was in the loop for the Russia contacts, we know that in seeking to fire Comey he was at least in part seeking to kill an investigation into himself.

Third: Miller came to Trump via Jeff Sessions. He was a top staffer to Sessions in the Senate. By 2016 he had risen to Communications Director. And when Sessions endorsed Trump in late February 2016 he brought Miller into the Trump circle. As a speechwriter and advisor, Miller played a key role taking Trump’s instinctive racist-nationalist politics and aligning it with the comparable policy mix Sessions had been pushing, with no great luck, in the Senate for years. We still don’t have a terribly good explanation of how Jeff Sessions got on the Russia bandwagon, how he ended up having as multiple private conversations with then-Russian Ambassador Sergei Kislyak over the course of 2016, including one private meeting in Sessions’ senate office in September. Miller seems like at least one likely conduit. At a minimum, Miller getting updated on Papadopoulos’ adventures makes it much less credible that Sessions knew nothing about the channels opening up between the campaign and Russia.

Posted by Michael-in-Norfolk at Monday, November 13, 2017