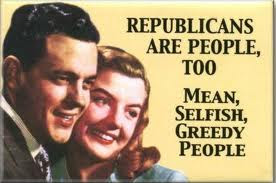 As a former Republican who was raised in a predominantly Republican family I am increasingly shocked by the ugliness of the agenda of today's GOP which seemingly puts little effort into the pretense that it is a political party that gives a damn about average American much less their families.  My late parents and grandparents would be shocked  at the willingness of today's congressional Republicans - and they are no better at the state level - to throw millions of Americans into the gutter while lavishing huge tax breaks on the disgustingly wealthy (analysis of the House "tax reform" bill passed today on a party line vote estimates the Trump family will receive over a billion dollars in benefits).  As for the Gospel message, in today's GOP, that is something that receives lip service in order to prostitute party elected officials to Christofascists (who in truth only cling to certain Old Testament passages to justify their hatred of others) while the core of the Gospel message is tossed in the trash or utterly ignored.   A column in the Washington Post by a conservative columnist who I suspect, like me, has disavowed GOP membership enumerates some examples of the ugliness of today's Republican Party.  Here are excerpts.

It turns out that electing President Trump was not the apex of Republicans’ political insanity. Since last November, consider the Trump GOP’s track record:

The GOP’s environmental agenda includes climate-change denial (despite the government’s own confirmation that climate change is real and man-made), lifting the ban on importing elephant trophies (the first sons are avid big-game hunters and Christmas is around the corner) and trying in vain to save the coal industry. Trump’s GOP has made China look like a leader in global environmental issues.

The GOP president now embraces (literally, I think) autocrats like the Philippines’ Rodrigo Duterte, applauds autocratic Turkish President Recep Tayyip Erdogan after a stolen election, barely if at all brings up human rights in China and Saudi Arabia, and has not a bad word to say about Russia’s President Vladimir Putin. The GOP now opposes multilateral trade deals (the North American Free Trade Agreement, the Trans-Pacific Partnership) while China makes trade deals and the TPP countries forge a deal among themselves without the United States.

The GOP’s constitutional conservatism amounts to giving a totally unqualified nominee who hid a conflict of interest a lifetime federal court appointment. . . . . “Brett J. Talley, the young lawyer nominated by President Trump for a lifetime federal judgeship in Alabama . . . did not, however, identify any family members — including his wife, who is one of President Trump’s attorneys. . . . He’s actually one of four nominees rated “unqualified” by the American Bar Association.

The GOP president believes 3 million to 5 million people voted illegally based on no evidence whatsoever but doesn’t think the Russians meddled in our election despite the unanimous findings of our intelligence services.

The GOP-led Congress is content to tolerate Trump’s nepotism, massive conflicts of interest and possible receipt of foreign emoluments. It looks the other way as a president monetizes the office, hawking his properties at every opportunity.

This is not a party that can be described as coherent, sensible, respectful of the rule of law, dedicated to equal protection or grounded in reality — let alone conservative. Today’s GOP stands for a set of crackpot ideas, unworkable and unpopular policies and a president not remotely fit to remain in office. Some sunny optimists think the GOP can be saved. From our perspective, it’s not worth trying.

I completely agree with the last sentence.  The GOP is not worth saving.  I made this decision numerous years ago at this point and believe that the best thing one can do is work diligently to see the GOP defeated in every possible election.  As for "friends" and neighbors who continue to live in a fantasy world and pretend that the GOP is still the party of their grandparents and parents, I have a few words of advice: get your heads out of your asses.
Posted by Michael-in-Norfolk at Thursday, November 16, 2017